House of Cards’ final season is horrible, strange and bizarre as hell 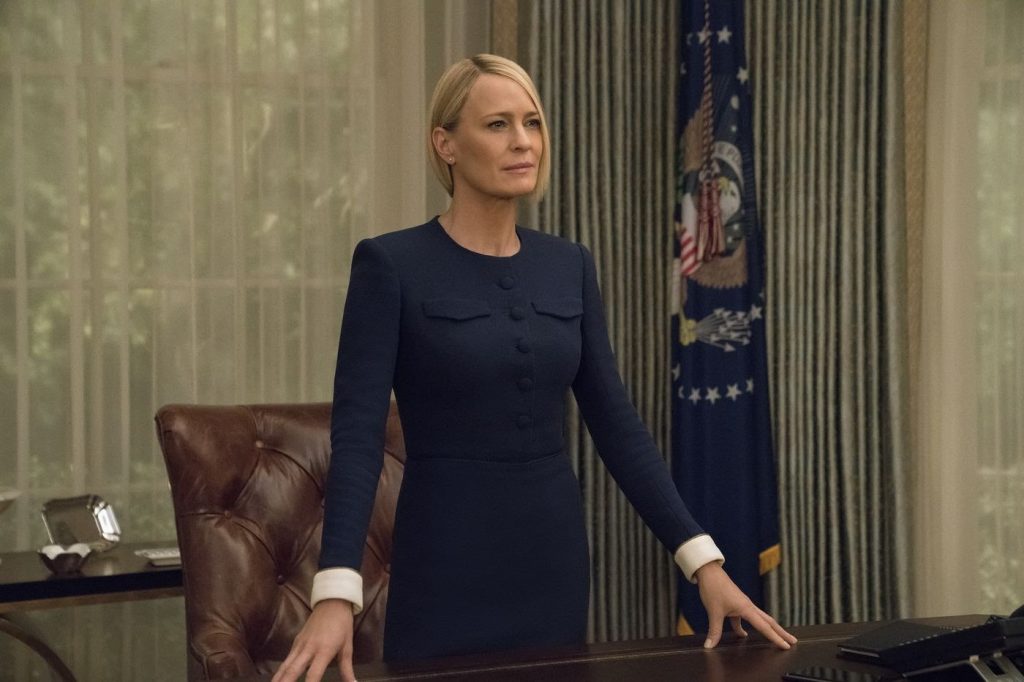 Robin Wright deserves whatever awards the industry can throw at her for her work on the sixth and final season of House of Cards, Netflix’s political soap opera that cosplayed as prestige television. Her efforts to salvage these eight episodes of the show are nothing less than heroic. But the odds were stacked against her.

Last November, Kevin Spacey was fired from the show due to allegations of sexual assault, and in the final season, Frances Underwood is never seen nor heard this season, despite the show’s long-running tease of audio diaries, suggesting that his narration throughout the show existed, at least partially, in-universe.
Underwood’s death is discussed in the first episode of season six, but it takes until the finale for the audience to learn how he actually died. It’s a mystery with no bite, and the answer is given to us during a scene that tries to be Shakespearean but is instead too absurd to take seriously.
[Ed. note: the rest of this post contains spoilers for House of Cards’ final season and everything before it.]

I’ll ask the following two, slightly spoilery questions about the finale before totally revealing how the show killed off its main character: Where was the Secret Service through all that? What are they going do when Claire Underwood has to explain the bloody scene in the oval office?
The show’s writers never got over Frank Underwood, and the way his figurative ghost haunts the season even though he’s pointedly never shown feels like an uneasy compromise. House of Cards still wants to center Frank, but Netflix doesn’t want Kevin Spacey onscreen in any way. That means no painted portraits of the dead character, and no inclusion of his voice-over despite the fact it figures so heavily in the plot.
There was only so much the show’s writers and producers could do under these limitations, and it leads to constant confusion for the viewer. Greg Kinnear and Diane Lane are added to the cast as a super-powerful brother and sister team with money and connections that may make them more powerful than the President herself, but the characters are discussed as if they had been there all along.

Doug Stamper scowls through the season as he tries to defend Frank Underwood’s legacy while also searching for a lost will — yes, really — and the character at least provides a look at the collateral damage people like Frank Underwood leave behind. What does someone’s fixer do when their client is dead, but they still love them enough to care about their legacy?

“I had to protect the legacy from the man,” Stamper says at one point, in a line that carries so much meta-significance for this show that I was surprised everyone didn’t pause to look at the camera. Stamper is interviewed by the Washington Herald’s Tom Hammerschmidt during one scene that provides some welcome catharsis, so at least one character gets answers to the questions they’ve been asking for so long. But sometimes knowing the truth isn’t enough; it needs to be on the record for it to mean anything.
It ultimately turns out that Stamper is the one who killed Frank when Frank was on his way to kill Claire, a move that would have tarnished his legacy. But even in the show’s world the Underwood legacy was already pretty dirty, so I’m not sure the average person thinks Frank was as great as Stamper would hope. Stamper cuts Claire with a letter opener while the Secret Service, as I noted above, must be getting coffee or something, and Claire is able to stab Stamper and then cuts off his air supply until he dies.

The Secret Service are going to have a lot of questions after that coffee break. No matter how this gets spun, the President just killed someone in the oval office. While pregnant. After being cut herself. During a nuclear crisis. Because sure, that all makes sense.
Characters are brought back from the dead only to die again, and major plotlines are set up but rarely paid off. There’s an environmental catastrophe that sets up an app that exists to suck up user information so a private entity can control elections, which is what happens when someone plays word scramble with headlines from the past few years.
One character is established, makes some mistakes, is given the truth about where he came from and is then more or less dismissed. He had what passes for an arc, I guess, but nothing would have been impacted if he were reduced to a line or two of dialog spoken by other characters.

The show seems to think that if a lot of stuff is happening, even if it doesn’t ultimately matter, you’ll be fooled into thinking these characters are master manipulators. Instead everyone comes across as inept, slap-fighting each other in the most petty and privileged ways imaginable.
Take, for instance, Claire Underwood’s plan to convey weakness and embolden her enemies by pretending to be in a drawn-out period of weeping depression. Everyone is just supposed to be forget the President was a shut-in for a few weeks? She heads off a story about having an abortion by appointing the country’s first cabinet made up entirely of women, and then becomes annoyed when those women actually want to do their job well and not just sign off on her bizarre schemes.
The bodies pile up, the wheels within wheels all go off the tracks and only FBI agent Nathan Green seems to understand what kind of show he’s in as he tries to remove himself the situation entirely.

Watching him do the minimum required to exist in this world and then bring his family to work in an attempt to convince Claire to let him resign provide the show with some of its most twisted laughs. This guy doesn’t care about anything going on with these people, and he knows the longer he hangs around them the more he’s likely to have an accident.

It’s a messy, incoherent and confusing eight hours of television without any strong idea of how to bring this show to a close. The decadent staging and oversized performances create a kind of cultural dissonance where it’s hard to believe the rest of it is this bad when it often looks so good.
In another time in American history we’d laugh at a show that presented a president with this many defections in their cabinet or the idea that a leader would exaggerate a nuclear threat for political points, but these days both of those story beats seemed almost banal. The American President meeting with a Russian leader to secretly cut deals for their own mutual benefit? You don’t say.
And through it all, Robin Wright refuses to phone it in or do anything but her best with the ridiculous work these scripts give her. She finds a real person in Claire Underwood, and then doesn’t allow the silliness of the rest of the production take that away. It’s a magnetic performance that is more than enough to carry its own show, and it would be great to get a seventh season or a spin-off that centers Claire Underwood from the beginning.

The final season of House of Cards is too weird and atonal to ignore completely, but it’s not good enough to recommend.

Too weird and atonal to ignore completely, but bad enough not to recommend. 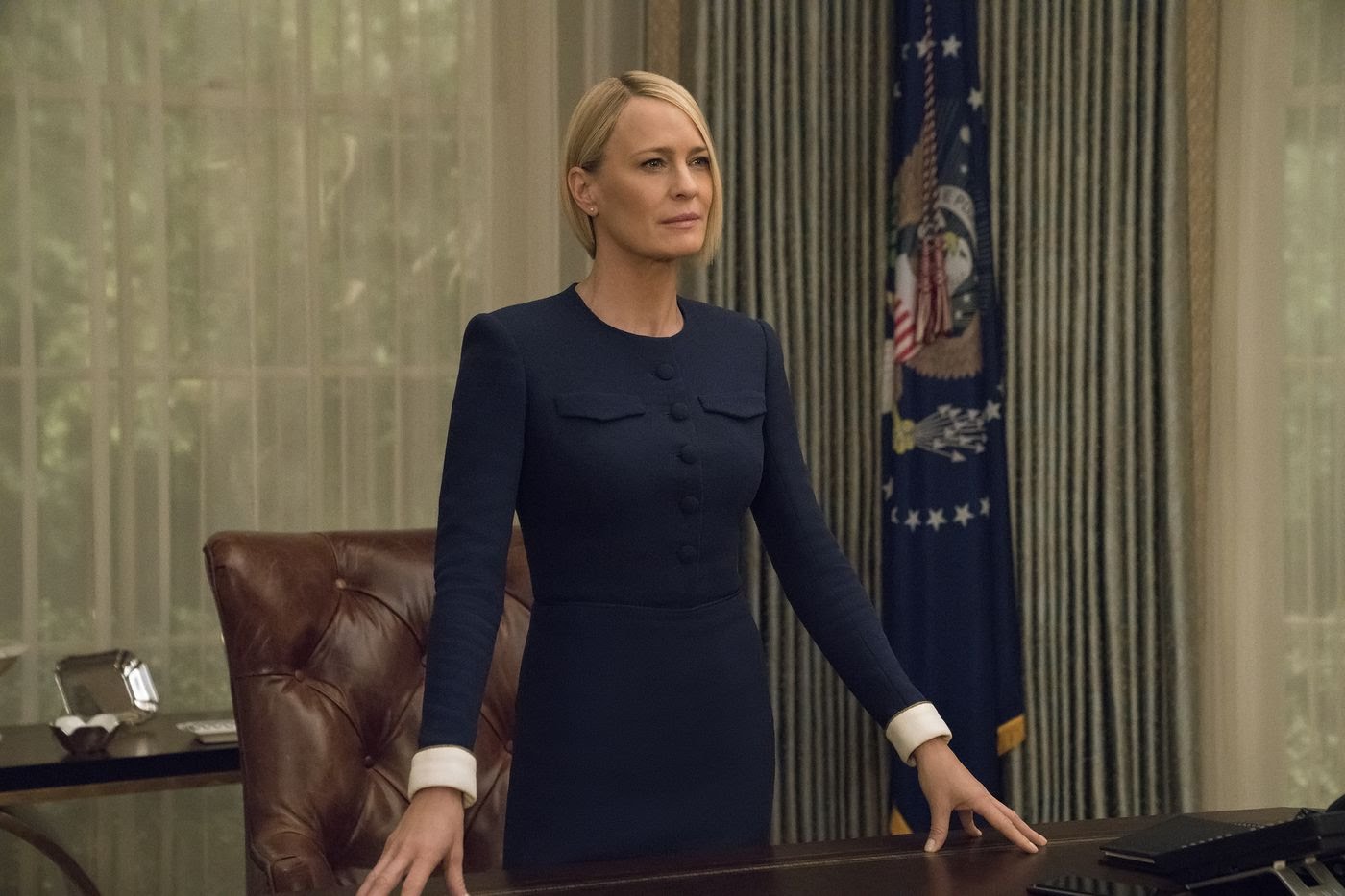