The deadliest sins to avoid

Self-pity is our worst enemy and if we yield to it, we can never do anything wise in this world.”

“Mind your own business! Stop comparing yourself to everybody around you. If you’re minding someone else’s business, who is minding yours?” — Barbara Corcoran

One cold Saturday morning, I asked my husband to drive me to a clinic for my appointment. Since I had no clue of how long it will take, I suggested he can finish his work instead of waiting for me.
Sounds like a better set-up. No waste of time for both of us.
I managed to finish just right after lunchtime. I figured out I can use the rest of the day to go shopping and unwind a bit.

My eyes can see the store but it was still a bit of a walk. I looked around me. Everyone’s hurrying to get in their car. After buckling their seats, they immediately drove past me. I was left thinking of the best way to get there.
Mmmm, I guess I should call my husband so he can pick me up and drop me off at stores I want. But guilt crept in that I’ll be wasting his time.
Then a decision has been made.
I’m going to walk all the way there. After all, I need some exercise. And walking is a great way to stretch my legs.
I headed to a nearest McDonald’s to grab something to eat and get a coffee. I looked at my possible route and my eyes twinkled. All I need to do is walk straight to get there.

I zipped my coat, put on my hood and grabbed my coffee as I prepare for that afternoon walk.
It’s a little bit chilly that day as the temperature dropped down to 28 F. But I am determined to reach the place so there’s no turning back anymore.
To people driving by, they probably think I am another homeless person walking in the midst of winter weather.
But to me, I feel like I am in New York city walking outside while deciding for the next shop to go. Nothing unusual. Just a normal, typical day for any New Yorker.
The old me would pity myself, but that day I felt a sense of liberation. Liberation from the old thought that I can’t do anything if I don’t have factor A, B, or C.

I altered the settings I have in mind to overcome obstacles that hinder me from arriving at my destination.
Self-pity can happen to any of us and may snatch our confidence. It can sabotage the good we have set for ourselves and can take control of our lives.
It’s poisonous to our growth.
But what would you really do when self-pity tries to paralyze you from moving?

What You Focus On Grows
“It’s impossible for you to conceive how far up is except for the limitations of your own mind.” — Pat Ryan
Some people focus on uncomfortable feelings by convincing themselves they suffer more than those around them. They are busy counting on what they don’t have versus what they can do with what they have.
Focusing on everything that is going wrong with your life will not only breed self-pity but will also lead to paralysis.
It’s difficult to move when you are crippled by negativities and impossibilities.
Other people become stronger and achieve better by shifting their focus. They look for ways on how they can use their current resources to improve their situation.

Napoleon Hill shared a quote from Jorgen Juhldahl that says:
“I won’t waste my time in futile unhappiness over my loss. Now must be seized before it becomes: yesterday-I-could-have-been.”

When I called my husband, he was surprised when I told him where to pick me up. He asked me how I got there. My response:
“Well, I’ve got two legs. And a coffee.”

Be very busy focusing on the next step that you lose time to pity yourself.

Break Boundaries and Imaginary Prisons That Cripple You
“Some prisons don’t require bars to keep people locked inside. All it takes is their perception that they belong there.” — Lysa Terkeurst
Benjamin P. Hardy once told his story about the challenges he had in publishing his first book. He was told that in order to be considered by agents and publishers, he needs to have a substantial readership.
At that time, he just barely started his blog and had zero subscribers. One agent said that it would take 3–5 years for him to get a publisher.
Instead of dwelling on the impossibility, Hardy took it as a challenge and changed his perceptions of reality.

Benjamin Hardy has said:
“Just because other people have limiting beliefs does not mean you need to.”

Some people will put you in a mental prison by defining the impossibilities for you. Self-pity makes you think that everything should turn in favor of you.
But life will not always favor you.

It is a matter of embracing the possibility of a better outcome or accepting the defeat your mind perceives.
Successful people know that failure is just a speed bump on the road to success.
You are not defeated when failures show up. You are not a loser when odds don’t turn in your favor. You become one when you fail to get up and fight.

Determine where you want to end up and not what blocks your way.

You Become A Victim When You Accept You Are
“Success doesn’t come from what you do occasionally, it comes from what you do consistently.” — Marie Forleo
When depression hits you, it’s almost impossible to look at positive sides of things. Everything blurs down except the painful emotions and experiences that surround you.
I know how it feels. I’ve been there.
Even though my family gave me the support I needed, they cannot lift me up from the pitiful situation where I chose to bury myself.
No one can really help you if you don’t help yourself first. Other people can only extend their hands. Without anyone receiving it, their help is wasted.

Peter Gruber, CEO of Mandalay Entertainment, has said:
“I may get knocked down, but as long as I’m breathing and still have the strength to keep trying, I will get up.”

Personalization
It is the belief that everything that happens to us is because of us. When a loved one dies, we blame ourselves and reflect on things that we could’ve done to prevent it.
In reality, we can only do so much. Death is something we cannot control.

Pervasiveness
It is the belief that an event will affect all areas of our life. We interpret our loss on one thing as equivalent to the loss of everything.

Permanence
It is the belief that the painful experience will last forever. When we get hit by a major loss or failure, it’s difficult to detach ourselves to its lasting effect.
These three principles also helped Sherly Sandberg to cope up with the untimely death of her husband. Her sudden loss allowed her to see the other part of her.
Sherly Sandberg has said:
“That even in the face of the most shocking tragedy of my life, I could exert some control over its impact.”

Ask yourself:
* Are you supposed to beat yourself for something you can’t control?
* Are you ready to confront the pain and see the hidden lesson?
* Will you choose to treat pain as permanent, personal and pervasive?
*
The More You Deny Painful Experiences, The More You Are at Their Mercy

“Fearlessness is like a muscle. I know from my own life that the more I exercise it the more natural it becomes to not let my fears run me.” — Arianna Huffington
Many people deny their struggles and conceal their emotional fragility for fear that it would make them look weak and powerless. In turn, all the emotional burdens pile up that eventually lead to self-pity and depression.
Said Brené Brown:

“Owning our story can be hard but not nearly as difficult as spending our lives running from it.”

Denying painful experiences will not erase them from your life.
Allow yourself to feel the pain and grieve if you must. It is part of being a human.
Strong people recognize painful experiences in their lives but they don’t run away from them. They face them squarely and bravely even though a part of them still feels the sting.
That’s how you become a warrior.
You don’t retreat from few stabs. As long as a warrior has the spirit to fight, he will keep getting up despite the wounds and stabs he got.

You may cry a river but then build a bridge over it.
Psychologists refer hardships as suffering-induced transformational experienceswhere you experience a firmer sense of self.
These happen when you reconsider your situation and reflect if you are willing to make a change or stay where you are.
It’s the same attitude that the couple Michelle and Jason Barsosky had when they experienced the lowest moments of their lives. They both got laid off and lost almost everything they had. Michelle just had her twins and her mom suffered from pancreatic cancer.
With the left and right punches of life, you would think they gave up.
But they chose to look at opportunity instead of misery.
They worked on something that can help their twins and Twin Z pillow was born. The idea became a hit when they pitched it on Shark Tank.
In fact, four sharks had to fight over the deal. Now, Twin Z pillow has a name of its own and is well received by twin parents who buy it.
Imagine what could’ve happened if they chose to dwell on the adversity.

Take Responsibility For the Choices You Make
“Accept responsibility for your life. Know that it is you who will get you where you want to go, no one else.” — Les Brown
Many people will continue feeling sorry for themselves because they don’t get what they need or want. They cannot take responsibilities for the choices they have made in their lives.
Thus, they are stunted to explore their possibilities and grow into a better person.
Feeling sorry for yourself is a perfect ingredient to failure. Instead of dwelling on your possibilities, you are counting on your impossibilities.

Turn your focus away from yourself and see the many things you have.
In the words of Jon Morrow:
“It’s only by acknowledging reality that you can create a plan to change that reality. Acceptance, as it turns out, is the first step to victory.”
Draw strength and inspiration from people you value.
I draw my strength from God. His words are what I exactly needed to remind me of the beauty of life I have.

As mentioned in Jeremiah 31:3:
“Yes, I have loved you with an everlasting love; therefore with loving kindness I have drawn you.”

When you eliminate self-pity from your life, you’ll face the circumstances with confidence. You don’t dwell on the inefficiencies of life.
Instead, you’ll treat each heartache and pain as a reminder that something beautiful will come out of the situation. You’ll develop the stamina to keep going for your dreams.

Only then you’ll see that you have no time to pity yourself because you’re busy breaking the negative self-talks you once created.
And that’s when you’ll see the authentic, efficient version of You. 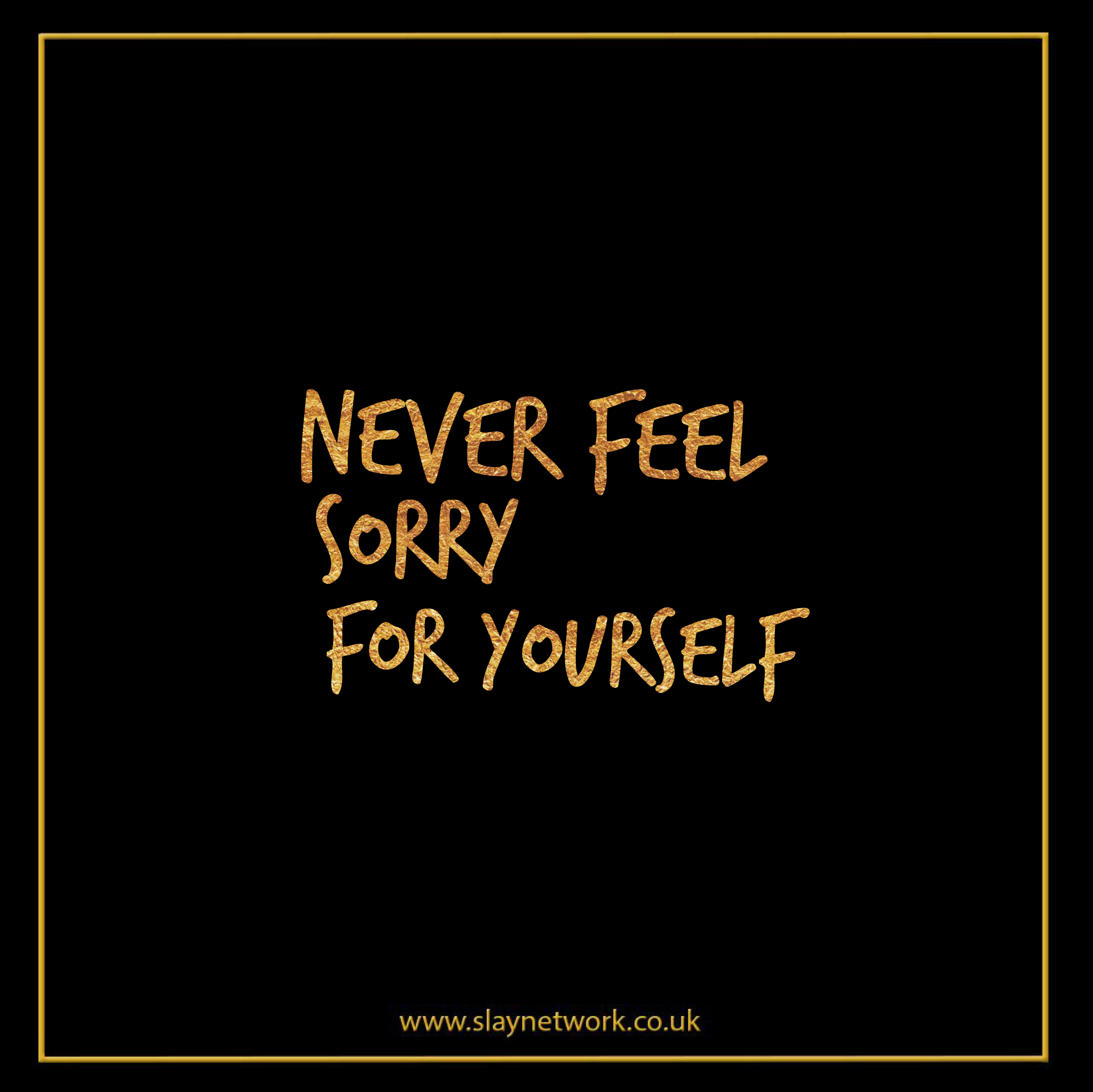