The piece is sited at Pier One of the narrow park, which occupies a post-industrial site that stretches 1.3 miles along Brooklyn’s East River edge.

Measuring 26 feet (eight metres) in diameter, the pool of water spins in a vortex that appears to collapse at its centre and descend into the ground. The artwork is surrounded by a railing, allowing viewers to peer down into the ominous whirlpool.

In a recent interview with Dezeen – in which Kapoor called for artists to engage with issues such as nationalism and Donald Trump – the 63-year-old artist stated that Descension has an “obvious association” with American politics.

“In New York at this moment, yes descension!” he said. “I toyed with the idea of trying out the title Descension in America to be more particular and to point harder at the current state of things, but I don’t think I need to.”
Kapoor – who was awarded the prestigious Turner Prize in 1991, and ranked as the most popular artist in the inaugural Dezeen Hot List – has been very vocal about recent political events.
Earlier this year, he formed a coalition called Hands Off Our Revolution with over 200 creatives, which will stage contemporary-art exhibitions to confront right-wing populism.

The Indian-born artist first created Descension for India’s 2015 Kochi-Muziris biennale, where it was installed indoors. Kapoor then reimagined the piece as a large-scale outdoor sculpture for his solo show at the Palace of Versailles later that year. This is the first time the sculpture has been shown in North America.
When previously exhibited, Kapoor treated the water with all-natural black dye, giving the illusion of a black hole. For this installation, he chose to leave the water its original colour after seeing it alongside the East River.

“One of the things I really like about the piece here is the degree of transparency of the water and the relationship to the river,” said Nicholas Baume, director of the Public Art Fund, which presented the artwork as part of its 40th anniversary celebrations.
Descension was officially opened to the public during New York’s citywide NYCxDesign festival.

Photography is by James Ewing, courtesy of the artist and Public Art Fund. 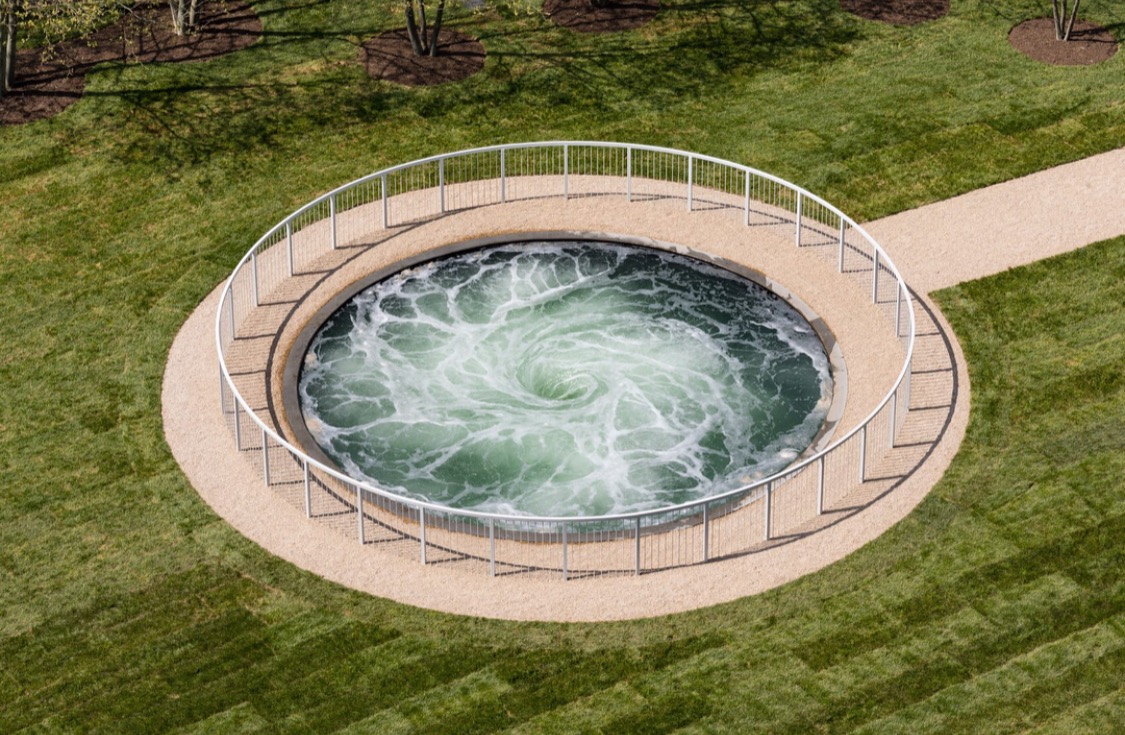