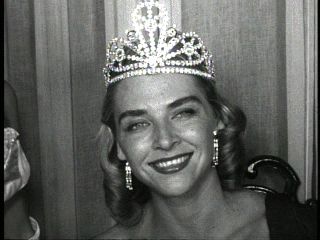 slaylebrity miss america collen kay hutchins At age 25 (the maximum age that an entrant may be), Colleen Kay Hutchins was the second-oldest
contestant to capture the crown (Debra Sue Maffett, Miss America 1983, is the oldest by a few months).

Colleen Kay Hutchins, who died in 2010, was the mother of pro basketball player and executive Kiki Vandeweghe and grandmother of
tennis player Coco Vandeweghe.

Colleen Kay Hutchins was a Salt Lake City resident when she was crowned as Brigham Young University Homecoming Queen in 1947.
Five years later she won the Miss America title. Vandeweghe said his mother acted on Broadway for a couple of years.She graduated
from the University of Utah, competed in the national beauty pageant as Miss Utah. She had grewn up in Arcadia and was an
accomplished swimmer who also studied acting at the Pasadena Playhouse. She met her husband Ernie Vandeweghe during
a New York Knicks basketball game and soon after that they married in 1953.

She appeared on the cover of the June 1952 Improvement Era, a magazine published by The Church of Jesus Christ of Latter-day Saints.