Why Finland students are the best in the world 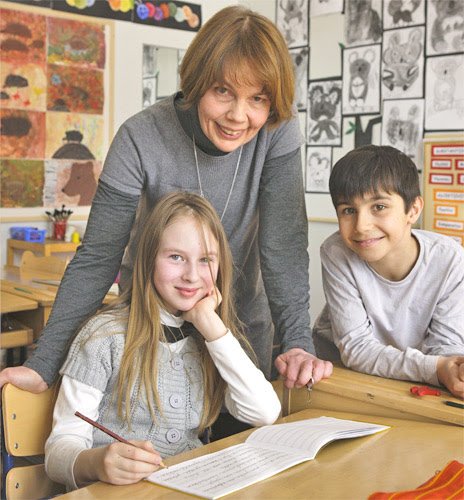 The Organization for Economic Cooperation and Development (OECD) tested 400,000 15-year-olds in 57 countries on science, math, and reading. Finnish teenagers placed number one in science and ranked number one overall. As a result, school administrators from all over the world have been descending on Finland to learn their secrets. For example, during one six-month period, one Finnish school had 300 foreign journalists visiting it. What they learned shocked some observers. Consider that the typical Finnish high-school student:

* Does only 30 minutes of homework on an average night.
* Doesn’t have a school uniform.
* Has no honor roll or valedictorian status to strive for.
* Has no tardy bell to hear.
* Didn’t start school until the age of seven.
* Doesn’t stress that much about going to college.

Instead of sending their gifted students to special classes, teachers encourage the brightest to help their fellow classmates along.
Nerds effectively become the teacher’s assistant. The smart ones aren’t as polite as the teachers. For example, when someone asks a stupid question, Finnish kids usually bark out, “KVG!” (which stands for kato vittu Googlesta or “check it out on fucking Google!”).
I can’t help but wonder what it says about the future of the human race when the smartest kids on the planet are swearing at each other like that.
American parents wish their kids could match the academic excellence of the Finns while not Americanizing their bad habits by yelling out “SFG” (Search Fucking Google).
Unfortunately, the US Education Department comes up with weak excuses why we aren’t able to duplicate the success of the Finns.
For example, they say most Finns speak Finnish, whereas eight percent of Americans don’t speak English. However, Finns must integrate many immigrants who don’t speak Finnish.
In addition, America’s eight percent average is, well, an average, which means many American communities have far less than eight percent who don’t speak English. Those districts also have lousy scores and can’t find Iraq on a world map.
Another excuse US school administrators give is that we have much greater income disparities than the Finns. Although it’s true that the Finns have little income disparity, I’m not sure why that should matter. And if it does matter, consider that within any US school district the income levels are generally similar. Rich families live near each other and send their kids to the nearby (rich) public school. The same goes for poor families.
In other words, income disparities within a US school district are generally not that great, but our children’s grades are terrible anyway. So much for the income disparity argument.

Following the money doesn’t tell the whole story either. The US spends an average of $8,700 per pupil, while Finland spends only $7,500.

At first glance, it sounds like we’re basically equals. However, averages can be misleading. Finland spends that $7,500 average on nearly all districts nationwide.
In the US, on the other hand, we spend far above the average in Beverly Hills and far below the average in Blackwater, Missouri. However, I’m not convinced that spending the same everywhere would increase our overall scores.
The Wall Street Journal had its own theory. It argued that one advantage of Finland’s system is that it doesn’t have an Ivy League tier of universities. All Finnish universities are all roughly the same, so there isn’t a hysterical push to get into the elite schools. This, The Wall Street Journal argues, decreases teen angst to get into college.
Still, not all Finns are perfect. On November 7, 2007, a high school senior, armed with a .22 caliber gun, killed nine people, including the principal, who was shot seven times in front of her students.
Less than a year later, on September 23, 2008, another senior (this time a college student) killed ten people, mostly women. The police searched the killer’s home the day before his massacre, but couldn’t take his gun away because he had obtained it legally. (Finland has the highest rate of gun ownership behind Yemen and the United States.) In his suicide note, the mass murderer explained his motives succinctly: “I hate the human race.”
In both cases, after his killing spree, the criminal blew his own head off. It’s unfair to point to these two extreme cases to prove that young Finns have plenty of angst. However, it’s may also be inaccurate to say that teenage Finns have far less pressure than their American counterparts.
Besides, let’s just say that Finns are truly more relaxed about their college futures than Americans. In that case, wouldn’t that make them less motivated to learn anything? If you don’t have to worry about your future, why study and learn? Why not spend more time in more fulfilling activities, like sex, drugs, and rock and roll?

Then what is Finland’s secret?

So what is the secret to the Finnish success?

I contemplated this while I was waiting for the Helsinki’s awesome Museum of Modern Art to open. I observed some Finnish teenagers who were smoking and flirting with each other. They had dyed hair, were a bit cynical, and were singing Bob Dylan’s “Knocking on Heaven’s Door.” They didn’t appear that different from American teenagers, yet American students got a C in the global competition despite all the money we throw at the problem.

The main reason for the Finnish educational success is that teachers are highly valued and have substantial autonomy. Although teachers in Finland are paid about the same amount as American teachers (and they have similar costs of living), the job is highly coveted—nine out of ten applicants are rejected.
Those who become teachers work hard to stay there. Most importantly, teachers in Finland are entrepreneurs—they customize each class depending on the needs and abilities of the students, instead of having to follow some nationwide mandate/curriculum.

When the Swedes and Russians were dominating Finland, the Finns asked themselves if they could be good at anything. They decided to make their education system their source of national pride. Therefore, in the early 1970s the Finns arrived at a consensus and stuck with it. If teachers want to make minor adjustments, they’re free to do so. Nationally, they haven’t futzed with the education system for decades.
One secret to their success is that the teachers will quickly and aggressively tackle the problems of struggling students. Another secret is that learning Finnish is relatively easy. For example, each letter makes a single, logical sound and there are no annoying exceptions.
Finally, there may be yet another reason for the Finn’s success. Because the five million Finns are the only people on the planet who speak Finnish, everyone learns English quickly. One of the main reasons they learn English so fast is that they never dub their foreign movies or TV shows—they only use subtitles. This has two benefits:

1. By hearing English so often, the Finns absorb English rapidly. The Germans, Italians, Spanish, Russians, and French all dub their foreign programs. As a result, their average citizen can barely help a foreign tourist find the train station.

I’m not suggesting that not dubbing foreign videos is the only reason Finns speak English and got the top marks on an international reading exam. However, it is an important factor. Indeed, studies show that learning a foreign language accelerates brain development. While other countries wait until sixth grade to teach a foreign language, the Finns start in third grade.
We don’t need to copy everything in the Finnish educational model. A common mistake when people look at the best of the best is to conclude that we should copy everything. We forget that they may be the best despite a methodology, not because of it. Nevertheless, we ought wander to Finland and learn from them.

They have no uniforms, no selection, no fee-paying and no league tables. Yet Finland's education system consistently tops global rankings.