SubliMotion, an enigmatic restaurant in Ibiza, Spain, is the world’s most expensive restaurant, charging more than $2,000 a person! Set to open at the Hard Rock hotel in Ibiza, Sublimotion offers up to 12 guests the chance to explore a fusion of culinary perfection with projection mapping technology. Guests enjoy a 20 course meal prepared by master chef Paco Roncero, which includes a menu of nifty lighting and projection mapping that accompanies the meal.

“What is SubliMotion? It’s hard to explain,” chef Paco Roncero explains in the restaurant’s promotional video. “[It’s] Ibiza, passion, gastronomy. A radically different show you can only experience for yourself.”
It’s certainly radical. The restaurant’s walls are a virtual light show, and and moving pictures are projected on the tabletops, including a garden scene with fluttering butterflies and Versailles-style paintings.

The decor is controlled by an operator who watches diners and changes the lighting or scene accordingly, to coordinate with a customer’s first bite or the flourishing of a new plate.”The micro environments depend on the cook, who is the ’emitter,'” explains one of Roncero’s sous chefs in the video. “The ‘receiver’ is the diner, the dish is the ‘message,’ and the setting is the ‘channel.’ All of this is inside the ‘micro environment,’ which is the place where you eat. For example, eating on the beach is not the same as eating in a field.” How very meta.

You may remember a similar experience done by El Celler de Can Roca’s culinary opera experience El Somni which transports guests to an insane magical and immersive world of food and projected light. El Somni similarly featured 12 guests sitting around a table in a multimedia dome as a 12-act opera swirls around them and on their table and food. At the experience you see the dining table and surrounding dome transform into a moon’s surface, mermaids serving drinks and not to mention, the unbelievable menu served up by the Roca brothers, combined with this magical opera.

The less You know about the meal, the more fun it will be. 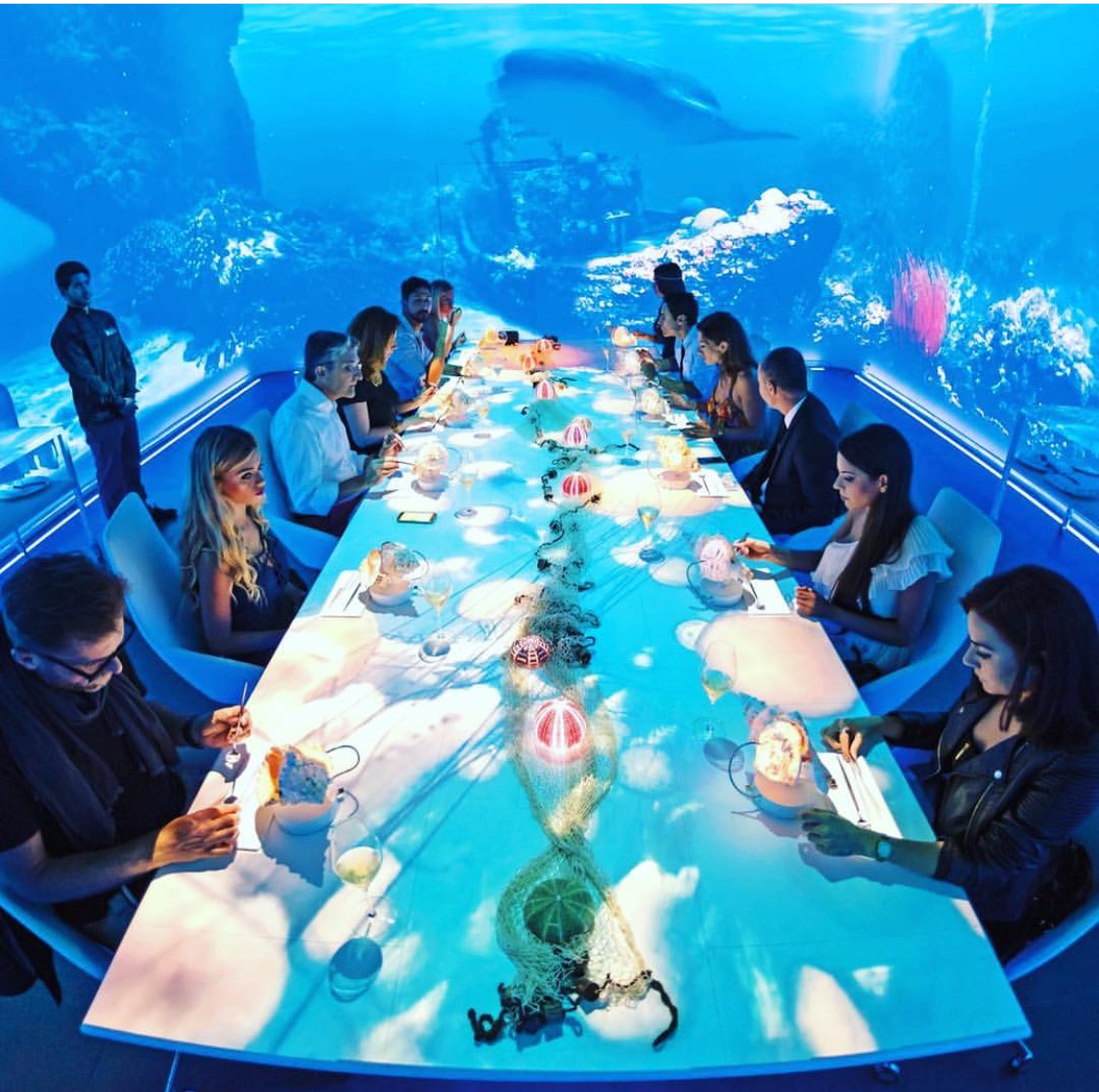 We could share the mind-blowing details of tonight — if we wanted. “But no one will believe you,” said our hostess. 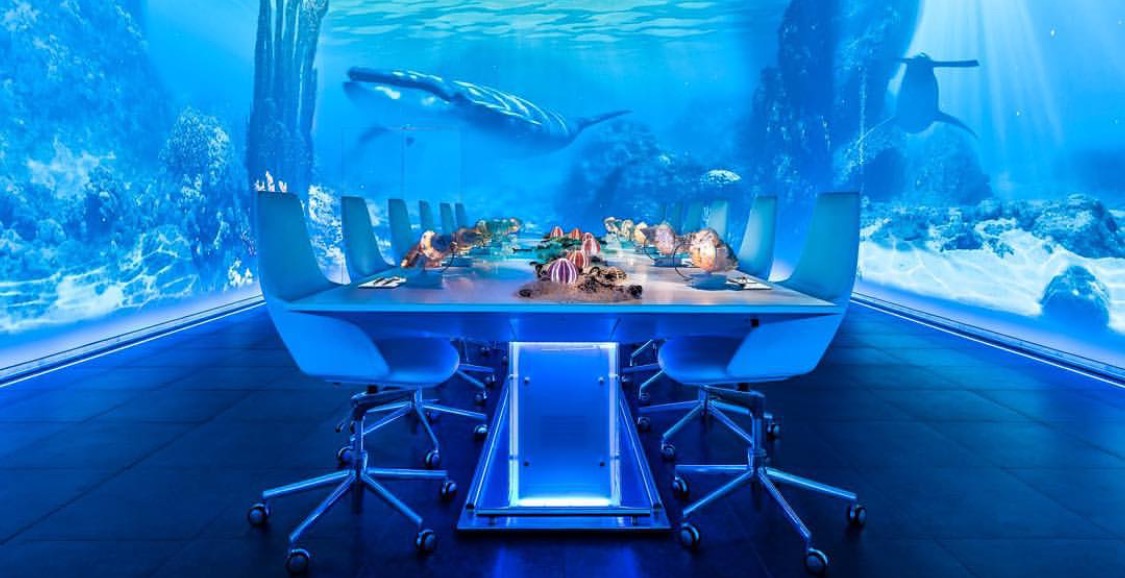 He handed us personal tickets that were paired with a shot. “The tickets are edible,” he said.

After a pause for reassuring looks around the room, we gnawed at the paper and bit into the envelope’s sweet raspberry seal.

I noticed a gold paper inside my envelope. “Ah, you have the golden ticket,” he said with an air of mystery. “Hold on to that for later.” 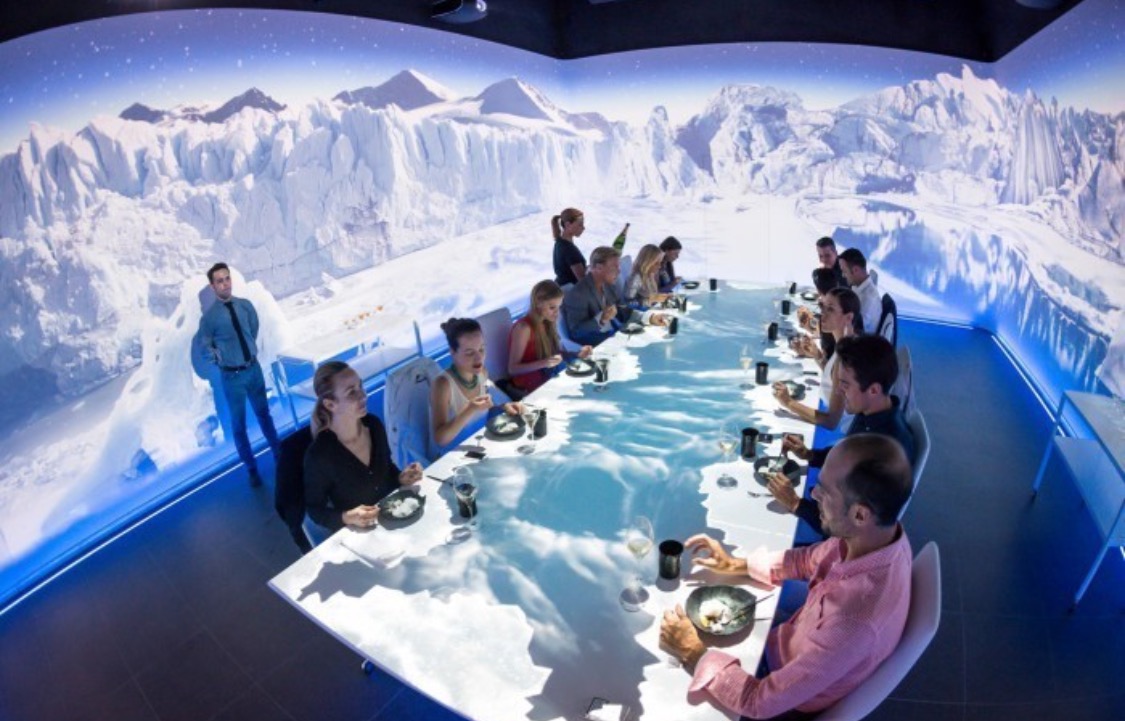 When we reached our stop, it felt like we had travelled through time. 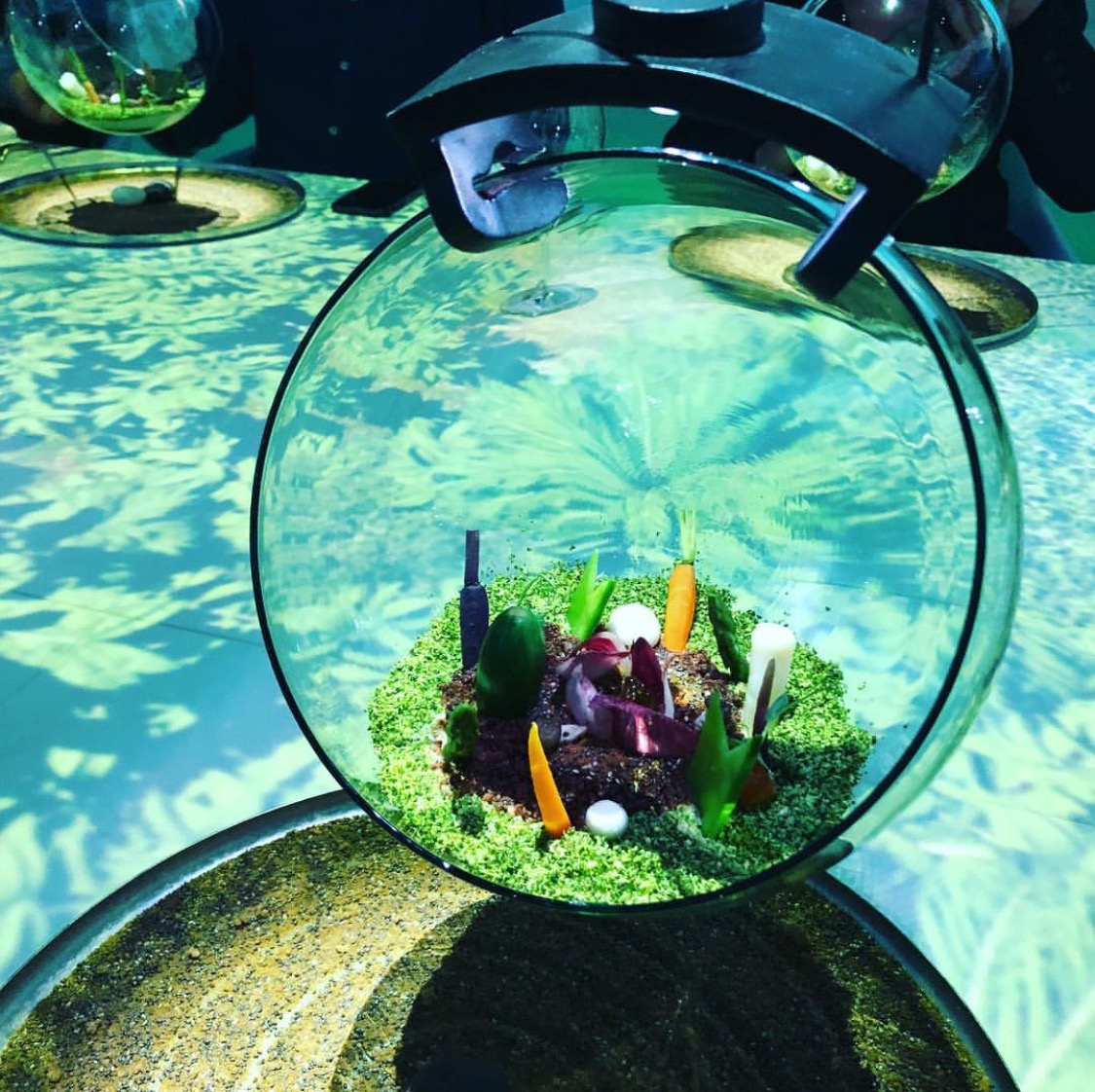 Our names were in neon lights above our designated seats. 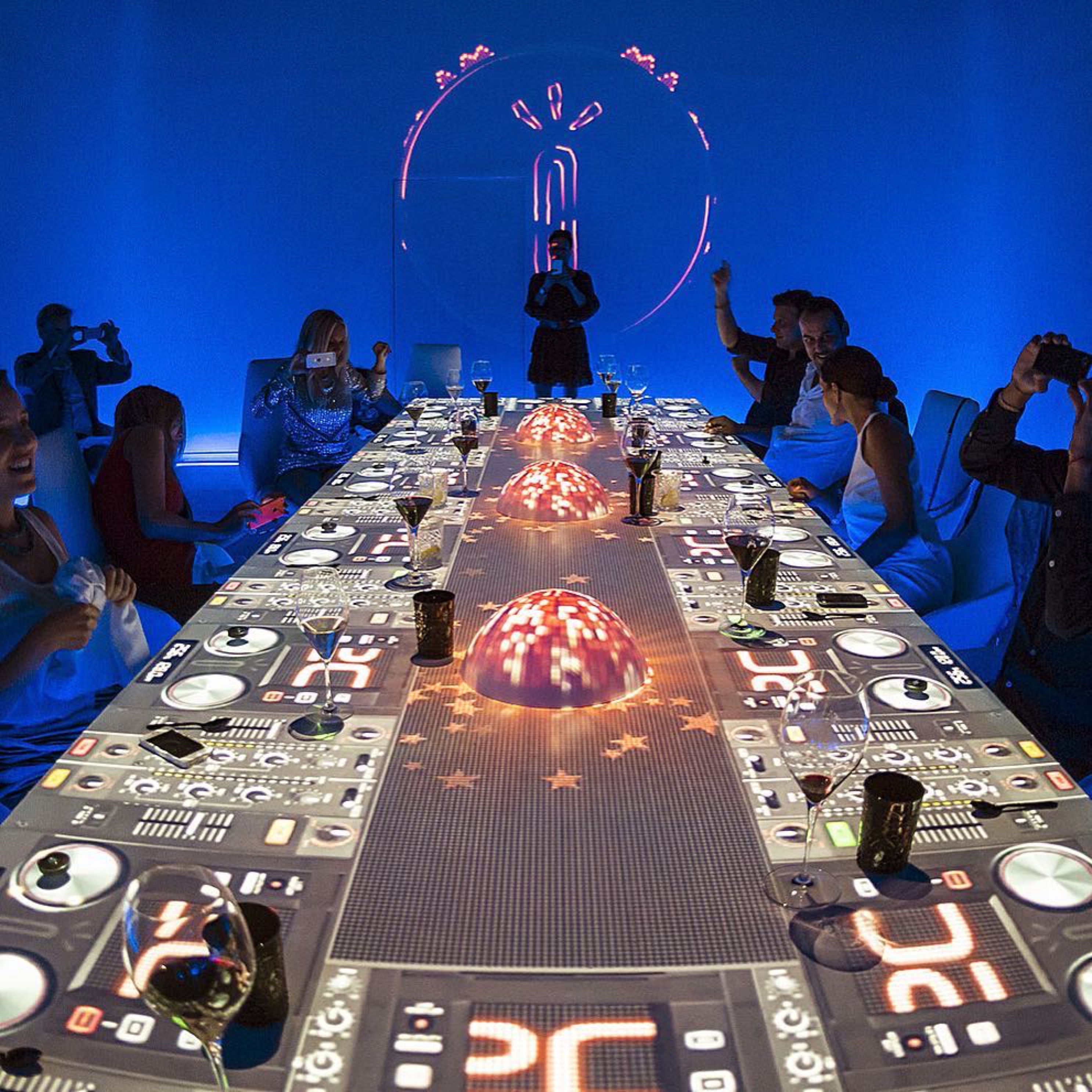 Once in our places, we swallowed our second course, which was a fruity pill (a symbolic precursor?) that melted in my mouth like sorbet. My senses and curiosity heightened, I decided to check my inhibitions at the virtual door. 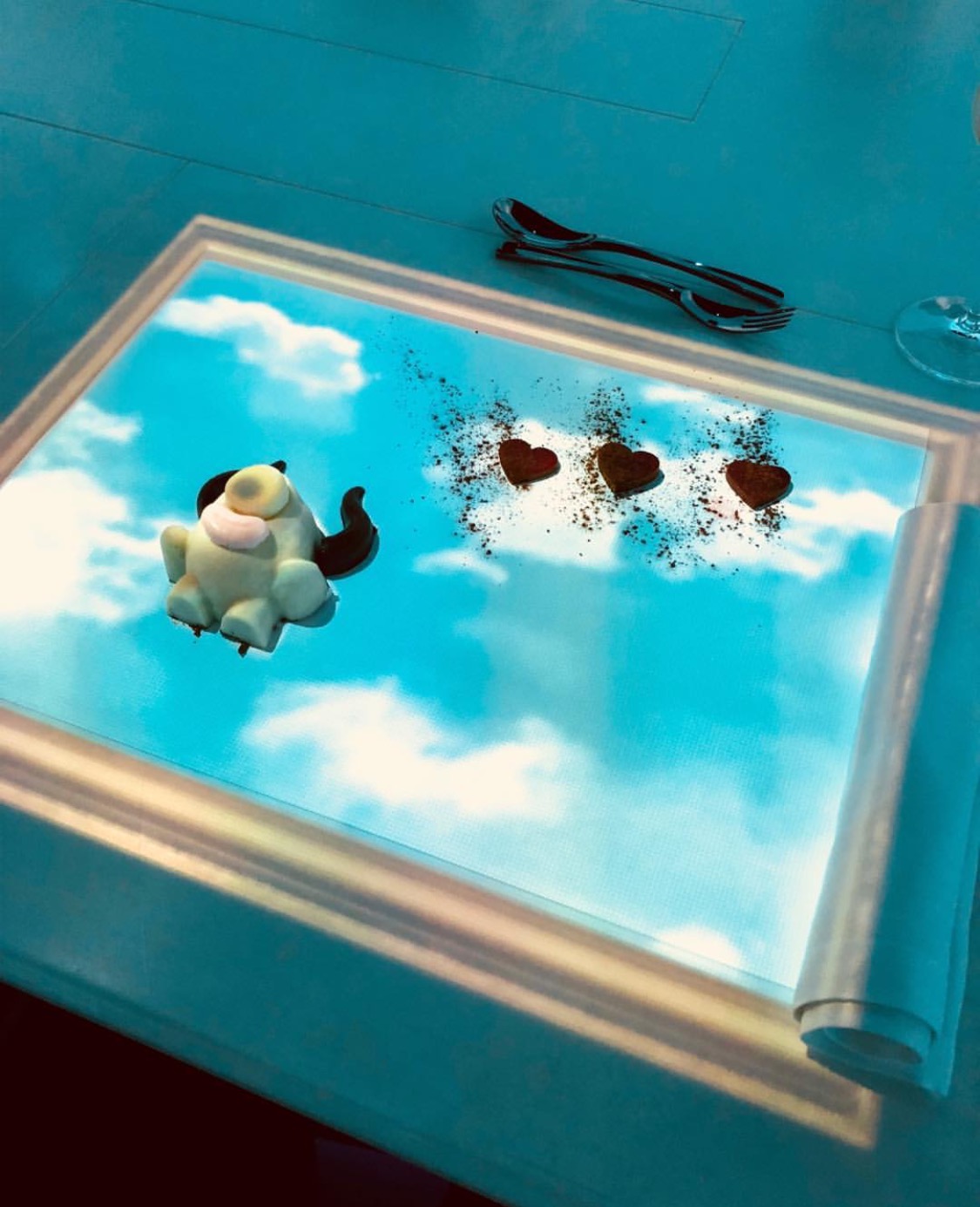 We were served the remaining courses in our seats, but nothing stood still. Thanks to light installations, projections, props, and virtual reality, we were transported from land to sea and jumped ahead and back in time as the scenery around us changed with each course — we even went skydiving and took a scenic world tour while wearing Samsung Gear VR specs.

Even the waitress is high tech

Each backdrop paired perfectly to the molecular meals being creatively placed before us as technology toyed with gastronomy and our senses.

With one explosive mouthful of nitrogen-frozen olive oil, we were off! We washed down caviar and oysters with Laurent-Perrier champagne and tonged juicy mouthfuls of fish from a cockleshell as sharks swam around us.

We slurped deconstructed shrimp scampi while riding the Orient Express, and hand-plucked salads from a buffet of vegetable gardens while relaxing in the countryside. 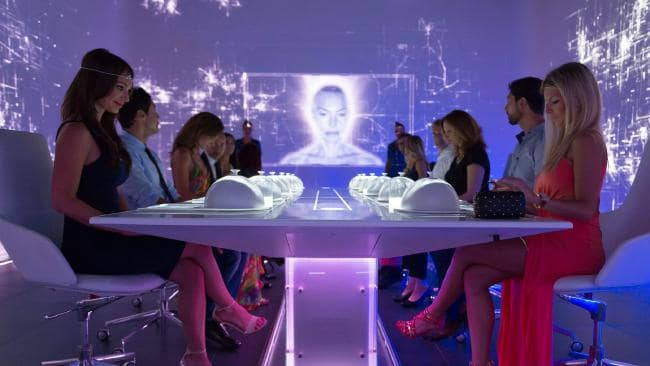 We spun around in our seats like children for a virtual adventure after eating an inventive meal from 2050 with our Samsung goggles. We sipped on white peach martinis and searched for the magic mushroom soup in a garden of waterfalls. Halfway through, our hostess re-emerged to ask about the golden ticket. I was so immersed, I had forgotten. “What do you miss from your childhood?” she asked. With a little help from my friends, we shouted out halcyon feelings from our collective days of youth and, poof! A circus appeared before our eyes. They rolled out Ferris wheels filled with classic treats, handed us balloons toting mini-sandwiches, and constructed a make-your-own dessert bar with cake pops, cotton candy, and popcorn in unrecognisable forms. After a healthy glass of Rioja wine to cleanse our palettes, we then found ourselves back on the Ibiza beaches for a vibrant dance party. Wearing peace-sign glasses as our waitresses danced a choreographed number, we dined on a surf and turf of BBQ steak, shrimp, scallop, and a side of molecularly changed corn. “I hear there are two courses of dessert,” my neighbour Daniella whispered. I was stuffed, but determined to make room.The first savory number was a gastronomic presentation of art. Our servers painted our placemats with scoops of lemon merengue ice cream and sprinkles of coconut flakes from an easel of ingredients. After placing chocolate lips in the centre, the lights above revealed their edible masterpiece: Gustav Klimt’s “The Kiss.” Then came the finale. Our table transformed into personal spinning stations and we were the DJs. The music pumped loudly and our desserts levitated as chocolate cakes spun ’round and ’round the neon turntables. In the party capital of the world, falling into a food coma after dinner is forbidden. Maybe it was the thoughtful ordering of the courses, or the lightness of the fresh ingredients. Perhaps it was my surroundings and the awesome people who joined me on this journey. It certainly could have been the spirited staff as they paraded around us with glow lights, ending our night with a private techno dance party. It’s too hard to pinpoint the culprit. All I know for sure is that after a three-hour, seated meal and too many drinks to count, I walked out of Sublimotion feeling energised, very alive, and ready to party well into the Ibiza night. And that’s exactly what we did. Later, I spoke with Chef Paco Roncero himself to answer a few of my still-burning questions. Like, how he came up with the idea, and what goes into pulling off this kind of meal, night after night? “There are probably 100 people involved in the creative and production process,” he says about the gastro-show, which changes its menu each season. “Our main space” — or “capsule,” as he calls it — “contains more technological infrastructure than many large-scale music venues.”Roncero says he came up with the idea while leading a culinary workshop at the Casino de Madrid in 2012. “I recognised that diners were becoming more interested in gastronomy and how it connects all five senses,” he says. Two years later, he brought Sublimotion to the most ideal locale for such a concept and now, his two seatings per night are nearly sold out from June through September. “We don’t see ourselves as a restaurant,” he says when I mention the lofty “world’s most expensive restaurant” title that seems to have attached itself to Sublimotion. “We play with emotions, the senses, the set, the aromas, and the taste to be able to create absolutely unique experiences with each scene.” So how does he describe the experience when people ask him what to expect? “Something you will only understand if you experience it first-hand.” Now do you believe me?