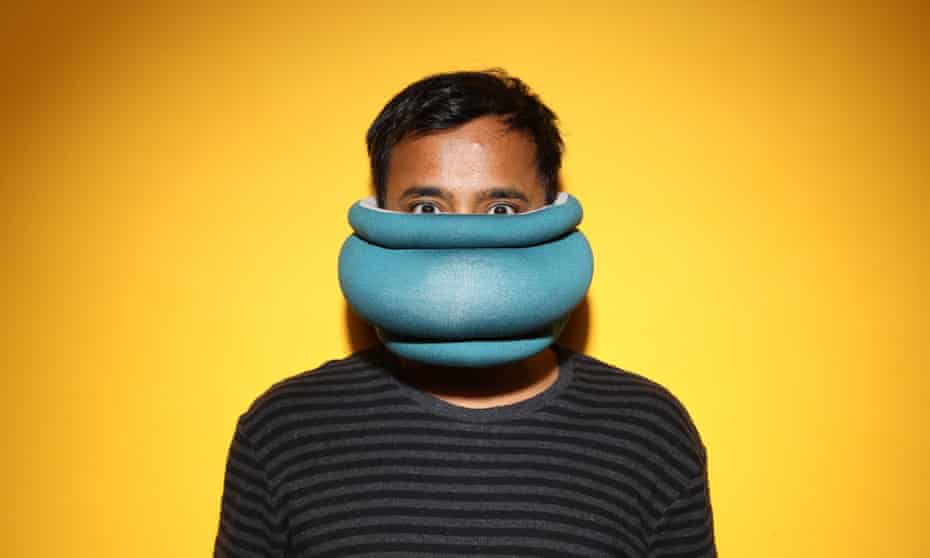 I remember seeing an Ostrichpillow for the first time. It looked like a bulb of garlic had mated with a football mascot and their spawn had eaten a human. It is an immersive, outsized, semi-portable nap-station – and utterly compelling. Seriously, if you haven’t seen one, have a look. The Ostrichpillow website features some profoundly odd promo shots: a woman curled into the foetal position under a table; someone sleeping standing up like a horse, head resting on a wall; another encased in an outsized fist of grey fabric. The plump, segmented gourd totally envelops the head, with openings at the side into which hands can disappear. It looks so odd, and from the first second I saw it I thought: “I want that.”

I didn’t buy one, though. As inviting as it looks, you would need courage to use it. An Ostrichpillow in the wild is a bleak snapshot of corporate burnout. The wearer appears to have given up on life, let alone their job. If your boss saw you cosplaying as Toad from Super Mario Bros and sleeping in a corridor, they would assume you were near mental collapse. Thank the Ostrich Lords, then, that the company has come out with a slimline alternative. Ostrichpillow Light (£32) is a segmented turban stuffed with tiny beads that wraps around the neck or eyes. It is an attempt to capture the engulfing quality of the original in a more elegant form. Rather than a job-jeopardiser, it is marketed as a travel pillow. To test it, I catch an economy flight home from Los Angeles where I had gone to eat cheap tacos. (Financially speaking, I’m good at making bad decisions.)

The main thing I notice is that it is exceedingly soft. The microbeads take the contours of my features as I slip it on, which feels cosy rather than oppressive. It is so comfortable. There is an elasticated drawstring, so the pillow can accommodate pea-heads like mine, as well as larger-headed icons like the TV presenter Richard Osman. How much of a maniac do I look? Well, the thing is, I don’t know. I am the only one who can’t see me. Maybe I look fine? Sure, when it is worn with the rear slit facing forwards, I might look as if I am mid-incubation by an Alien facehugger. A fellow passenger may alert the flight attendant. But is that a minus? It could be a bit of colour on the journey home.

If you are self-conscious, a sleep mask will suit you better. I, however, am looking for more.
Most sleep masks let a little light in, often around the bridge of the nose. Being a spoilt emperor, I find even one errant photon unacceptable. With the Ostrichpillow, you get nothing but darkness. Stephen King, Mariana Trench, Madame Tussauds after closing time darkness. It is blissful. Unthinkably, given the proximity of farting strangers, I start to nod off.
The effect is heightened by the covering of the ears, which sleep masks cannot replicate. Cocoon-like. It is not so much about eliminating sound as muffling its vibration and removing contact with the air. I couldn’t wear my bulky noise-cancelling headphones, but found to my surprise I was happy to do without. Earphones were accommodated just fine, and you can push the fabric above your eyes without losing neck support. I was able to watch Aquaman in peace; or I would have done, were it not the worst thing that has ever happened. And not just in the history of film.
The pillow isn’t perfect. It is meant to be reversible, but I found one side more comfortable than the other. It runs warm, too. The full-sized version must be like a kiln with a porthole. But these are easy things to forgive. Nothing can redeem the plastic cauldron of suffering that is long-haul budget flying, but the pillow does a lot.

I was able to use it as a neck warmer when I’d had enough refrigerated air blown directly into my face, and stuff it down the back of the seat just before my vertebrae had permanently relocated. This travel cushion has range. I wish I was brave enough for the otherworldly, uncompromising oddness of the Ostrichpillow Original. But its presentable cousin is far more my speed. In adverse conditions, it gets you dozy and cosy, and quickly.