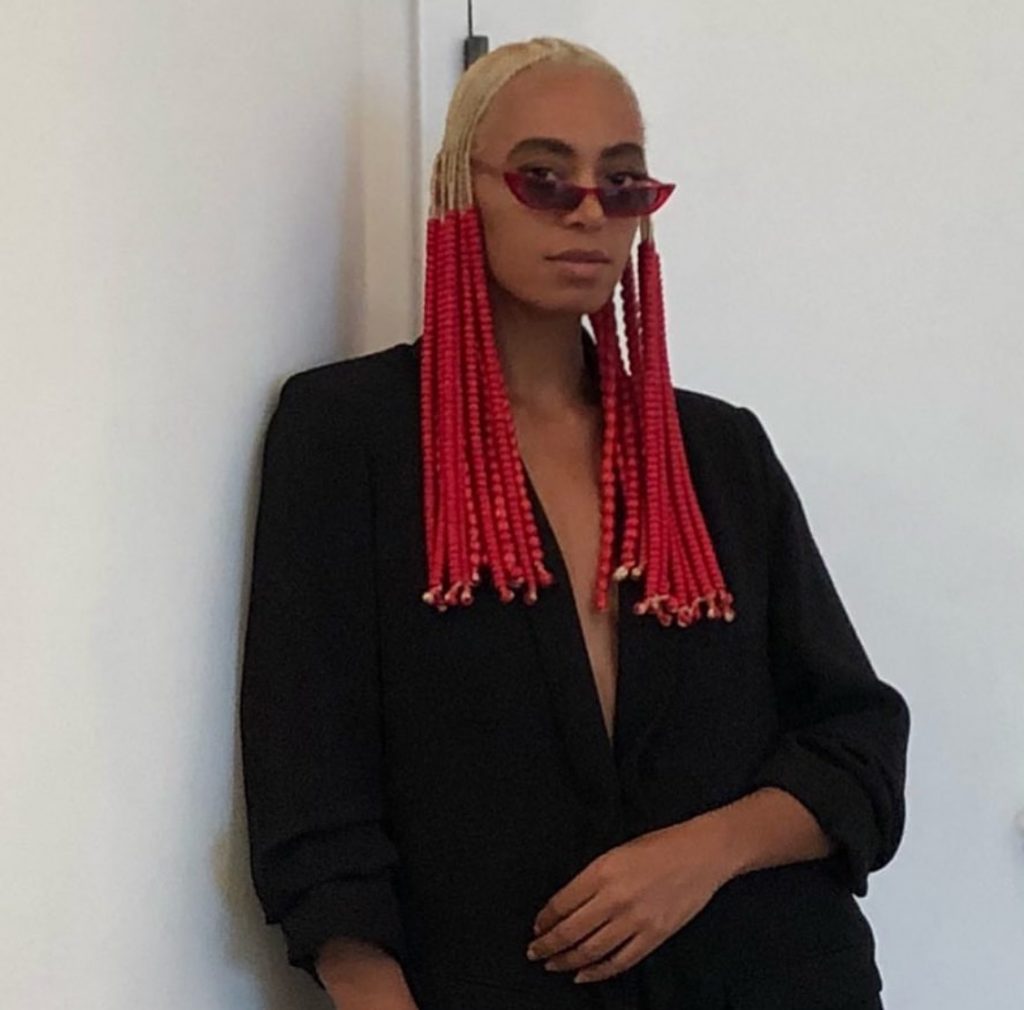 Before last month, Solange Knowles hadn’t strayed from her natural, dark hair in quite some time. But then September came and so did the transformations. First, it was a chop and a brand-new platinum hue, followed soon after by waist-length braids. Since then, she’s gone back and forth between the two hairstyles: cropped and curly, and long and plaited. This weekend, however, she went ahead and spiced things up yet again.
The “Don’t Touch My Hair” singer was in Texas over the weekend for the Austin City Limits Music Festival where she wore her hair in the aforementioned braided style. This time, though, she took things up a notch (or you know, 10) by adding beads into the mix. Knowles took to her Instagram to debut her dope new look in what I’m dubbing now as the coolest selfie ever taken.

Sporting glossy lips and big hoop earrings, she showed off her fresh braids adorned with intricate red beading from her collarbone down. To top it off, she wore red-tinted sunglasses, tying the whole look together with an ultra-cool, low-key futuristic feel. Naturally, her fans went wild over her new ‘do, taking to the comment section to sing its praises.
“This hairstyle,” wrote one user and “Literally every look you have is iconic,” added another. And those were just two of hundreds.
Needless to say, Knowles definitely seems to be having a blast switching her up hair as of late, and I, for one, am totally here for it. Now, what could she be planning next?

Looking to stand out with your hair? Click here 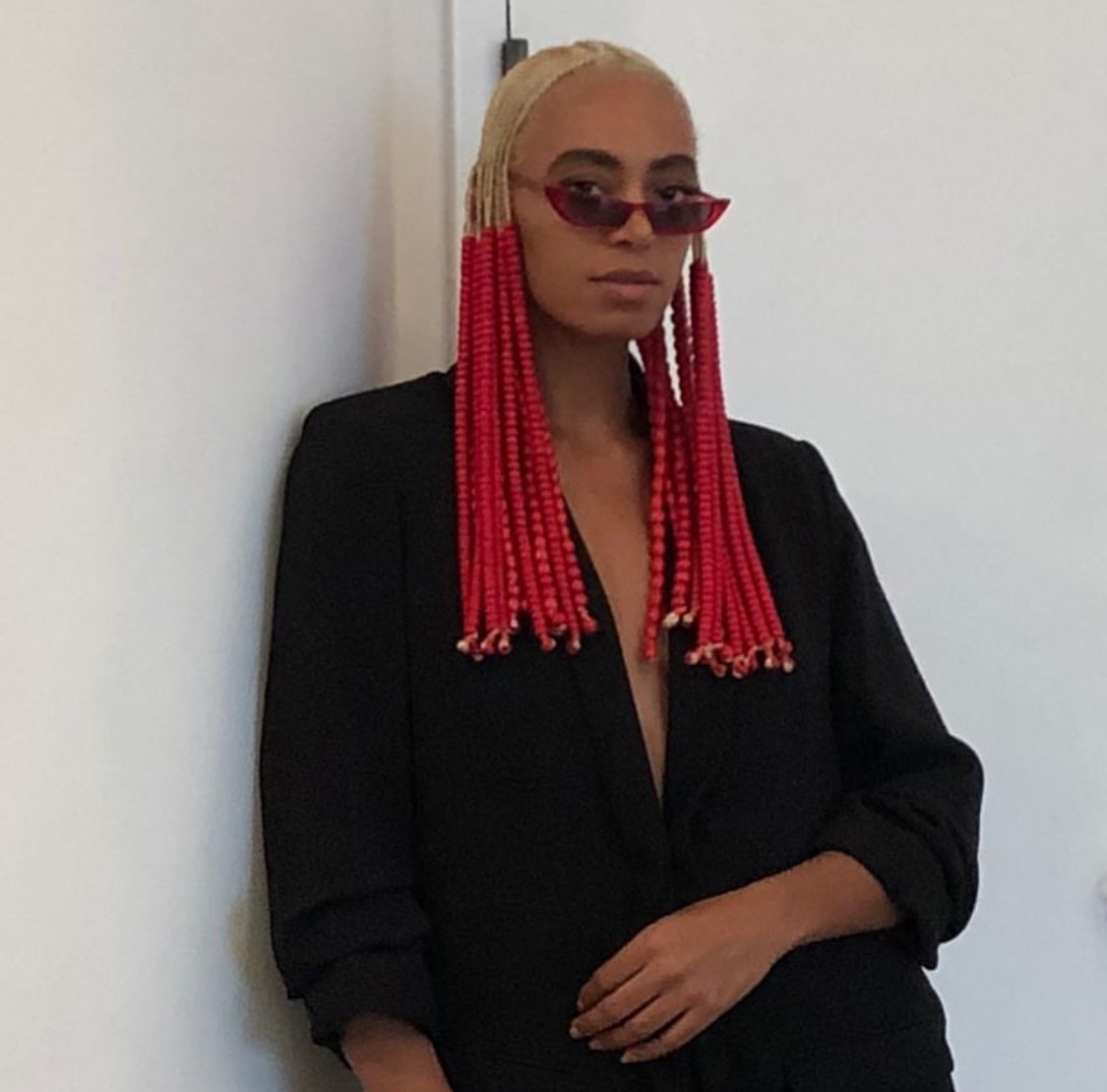 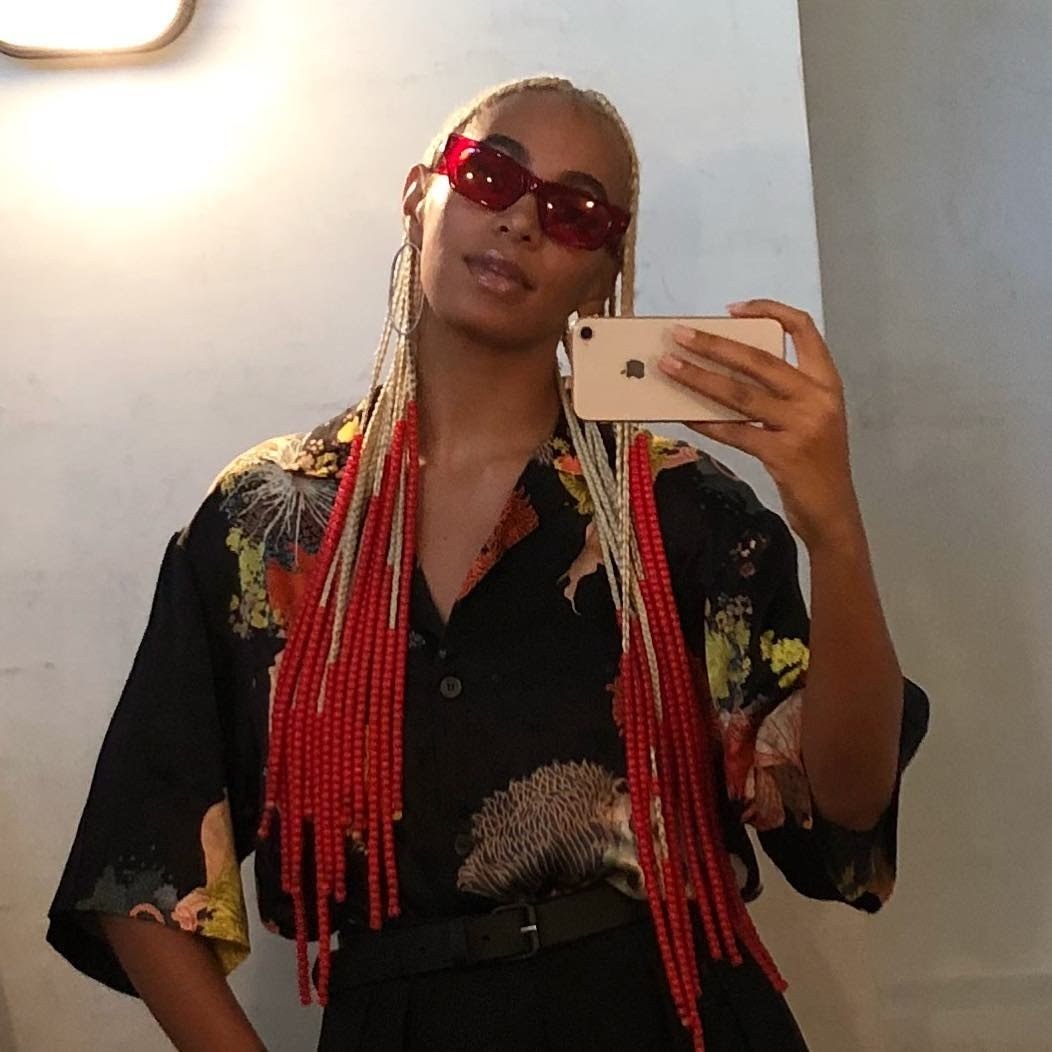 Solange's Hairstylist on How the Pop Star Achieved a

Never one to shy away from artistic expression and evolution, Solange Knowles is continuously debuting new hair transformations that make us all take note. The singer has rocked everything from voluminous curls to long braids to buzz cuts, and her hairstyles never seem to fail or inspire her millions of fans. This time the songstress debuted not only a new style, but a strikingly new hair color as well. Swapping out her signature brunette color for platinum blonde has only upped the ante on the musician's new short natural curly afro—just after she debuted her beach blonde braided look during New York Fashion Week. With the sudden back-to-back hair metamorphosis, we had the opportunity to catch up with Knowles's hairstylist, Chuck Amos, and find out what inspired the drastic switch-up and what hairstyle does she plan to pull off next.How did you begin working with Solange? I started working with Solange just after we met at a photo shoot in 2009. I did one of the hairstyles on her for that shoot and the rest is history. What inspired Solange to go blonde? She wanted to do something that was totally left of what she's been doing lately. Something with natural hair, but that still pops! Solange’s hair is always next level and she’s known for her voluminous curly afro. Why did she decide to go for the big chop? She's a true artist and change is a part of Life. She understands that and changing her hair isthe statement, like her songs. And as we know, she is not a stranger to cutting her hair off, as we have seen in the past with her. Going short doesn't bother Solange.How do you maintain the color with her natural curls? Since it's more of a hair lightening process and not a direct color application, there is no need to worry about fading or having to use color safe products. With lightened hair, you have to maintain the brassiness of the color with toners and silver rinses to keep the color at a nice appealing light blonde color. What products are you using on her hair? I used Pantene Gold Series Moistures Boost Shampoo and Conditioner, the hydrating butter creme and the intense hydrating oil. I wanted to use products that were going to moisturizer her hair from the core, because when natural hair is lightened so much, it is compromised of its inner strength.What natural hair techniques do you use for Solange’s new short afro? While her hair was still damp, I used the butter cream and hydrating oil to moisten her hair from the core, then I wrapped small sections of her natural curls around a pencil to distort her natural curl to create an artistic shape to them. After that, I used a diffuser, switching from medium to hot, and then cool when fully dried. I've then separated her curls and with a cold blow dryer blew her hair in a circular motion around her head to lift her curls from the root to create a "coral reef" effect to her hair.What advice would you give to those who want to go blonde with or without natural hair? Going blonde is a hard process on your hair, whether it's natural or not. It compromises your hair's moisture the properties of what your hair is originally about. So you must always have moisture in your hair, especially to the core, and make sure that you do a strand test somewhere in the back of your head to make sure that your hair can withstand the strength of the bleaching process. Once you achieve your bleaching color, make sure you keep hair moisturized to withstand any post bleaching breakage that could occur.

Solange Responds to Magazine That Edited Her Hair on Its Cover 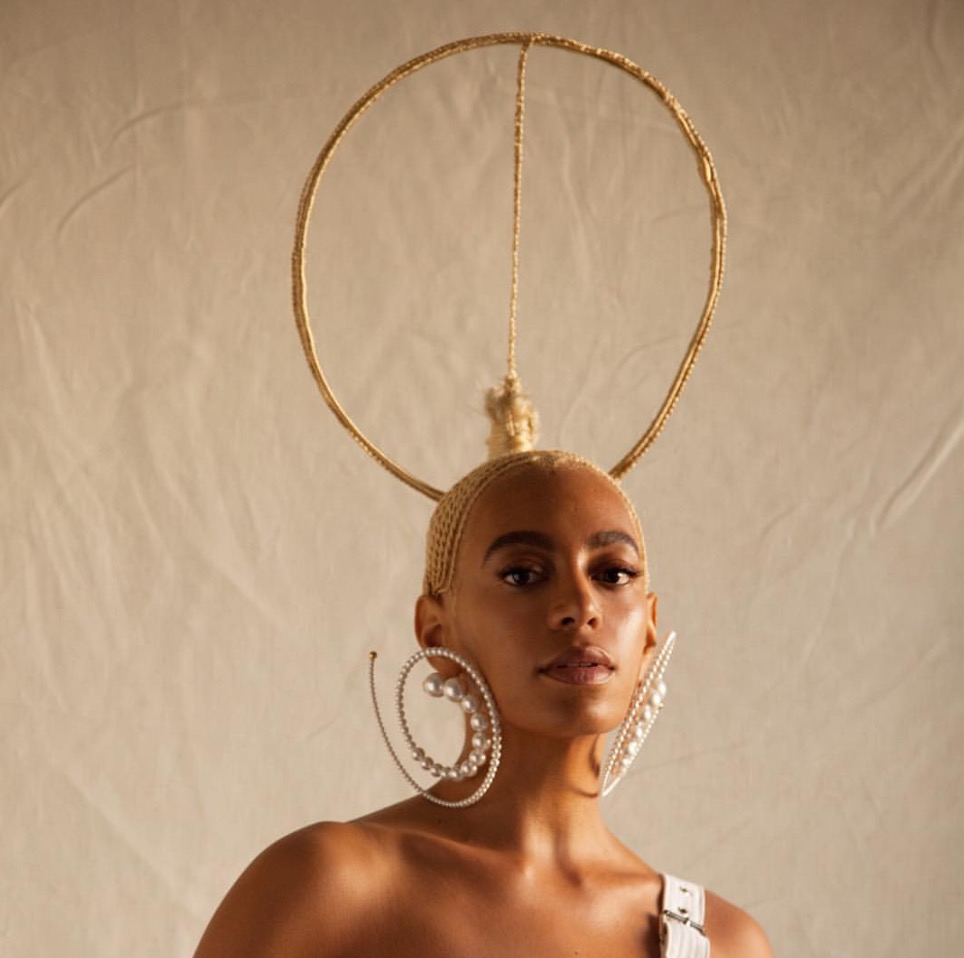 As a musician and artist, Solange has an ability to clearly say—and sing—the things so many of us feel but can't quite express. Case in point: her song "Don't Touch My Hair," which beautifully embodies the complicated range of emotions that come with being exoticized because of your hair type or texture. It's a great song with a clear message that the singer reiterated yesterday evening in an Instagram post caption. As first reported on The Huffington Post, Evening Standard magazine featured Solange on their most recent cover. The cover story included a gorgeous photo shoot and multiple quotes from Solange about the importance, pride, and power of hair in her own life and the lives of black women. There’s just one problem. On the Evening Standard cover, Knowles’ hair was digitally altered and her signature Orion crown braid was erased.In response, Solange posted the original photograph on Instagram yesterday, with guess what message…Yeah, don’t touch her hair. The decision to do so seems strange for a number of reasons. You can't really tell for sure, but it doesn't look like her crown would have interfered with any text on the cover. In fact, Solange shared an image of the cover on Instagram Stories, circling the place where her braid had been erased, and where there is now nothing but blank space in its place.The Evening Standard shared the whole breathtaking photoshoot inside the magazine—seriously, I audibly gasped and was momentarily robbed of my breath—on its own Instagram feed and Solange's hair is intact in every photo. Plus, as previously mentioned, the singer talks at length about what her braids—and her Orion braid in particular—mean to her in the story. Spoiler: an awful lot. For example, here's an excerpt Solange screen-shotted and posted on Instagram stories:Braiding is important to Knowles. It is an ‘act of beauty, an act of convenience and an act of tradition’—it is ‘its own art form,’ she adds. Every black woman has a personal journey with her own hair, and for Knowles it began in her mother’s salon which was a refuge—‘a spare bedroom to speak’—for her as a young girl. Growing up there was pivotal. ‘I got to experience women arriving in one state of mind and leaving in a completely transformed way. It wasn’t just about the hair. It was about the sisterhood and the storytelling. Being a young girl who was really active in dance, theatre and on the swim team, the salon was kind of a safe haven.’Fans were quick to jump to attention in the comments and express their own disappointment in seeing her hair, well, touched. And while it doesn't seem like intentional whitewashing, tidying up, or any other racially motivated decision to remove Solange's crowning glory took place, when a Knowles woman speaks up, you best listen. Solange has spoken. Don't touch her hair.