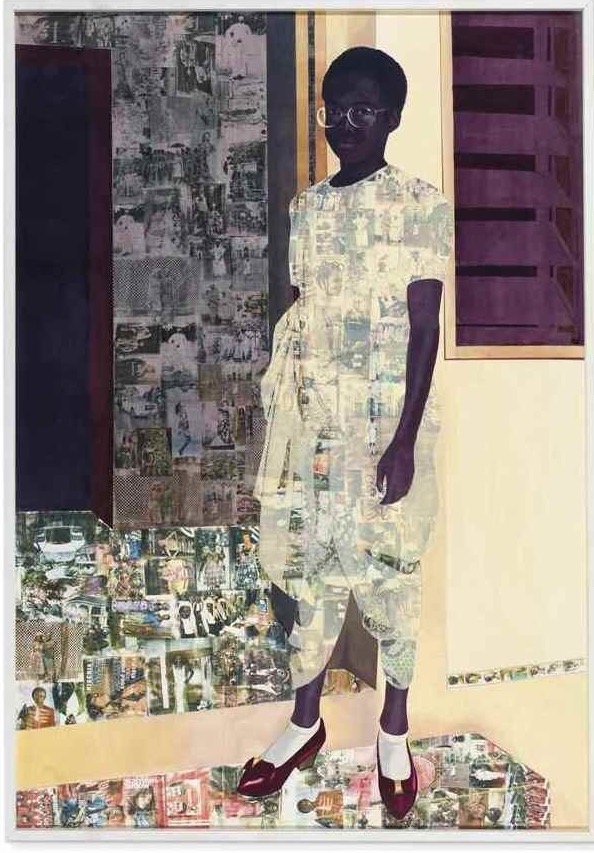 Njideka Akunyili-Crosby, daughter of late NAFDAC Chairman and former Minister of Information, Dora Akunyili, has one child with American husband Justin Crosby.
In an interview with the Guardian UK, the Victoria Miro artist talked about impending motherhood, how she took her first art class at 16, her mother, Mean Girls at Yale University, her heroine Chimamanda Ngozi Adichie, and the debt she owes Harlem’s Studio Museum.
She made an interesting revelation about her late mother. Akunyili, then a poor lecturer at the University of Nigeria Nsukka, was diagnosed as needing major surgery and was given 12, 000 from a work insurance fund to go to London and have treatment. But the London doctor said it was a misdiagnosis, so she gave the money back. “Nigeria is not a country where anybody ever asks for you receipts” she explains. “And knowing how poor we were at the time, it’s amazing that she didn’t keep it” Born in 1983 in Enugu, Njideka is seven months pregnant with her first baby, though you would barely notice.
“People in LA say, ‘what’s your birth plan’, and I’m like, ‘I don’t know!’ My whole mind has just been on this show,” she says, her laughter resonating around the vast white room. She adds that, being from Nigeria, the whole fuss around pregnancy in California seems a little unnecessary. I’m from the village,” she says, wryly, “and women there seem to give birth just fine without all this stuff.” She moved to the US at the age of 16, and discovered that her homeland didn’t really matter to the outside world, other than as the scene of crises.
“I don’t want to write off the horrible things that happen in various African countries, but we’re not all walking around thinking about Aids and Boko Haram all the time. Those things affect us, but lots of times our problems are the silly daily problems that you have here. How do I get a date? Will my pay cheque be enough for this dress I want to wear to the wedding?” Njideka revealed she met her heroine, acclaimed Nigerian author, who also moved from Nigeria to the US to study, a couple of times.
“She has this short story where the main character goes to a writing workshop, and she writes about someone whose boss is sexually harrassing her. And the teacher says to her, ‘Why don’t you write about an authentic African experience?’ Well, what is authentic – you think we don’t have these issues in Nigeria, too? Stuck in traffic, 30 minutes late for a meeting – that is the bulk of life. It’s a horrible example, but even in the midst of a tragedy like the Ebola epidemic – most people are probably just living their lives. That’s why so many of my figures [in the paintings] are really doing nothing. I think people sensationalize places in their heads, so I wanted to show just how normal life is in Nigeria”

Njideka with her painting 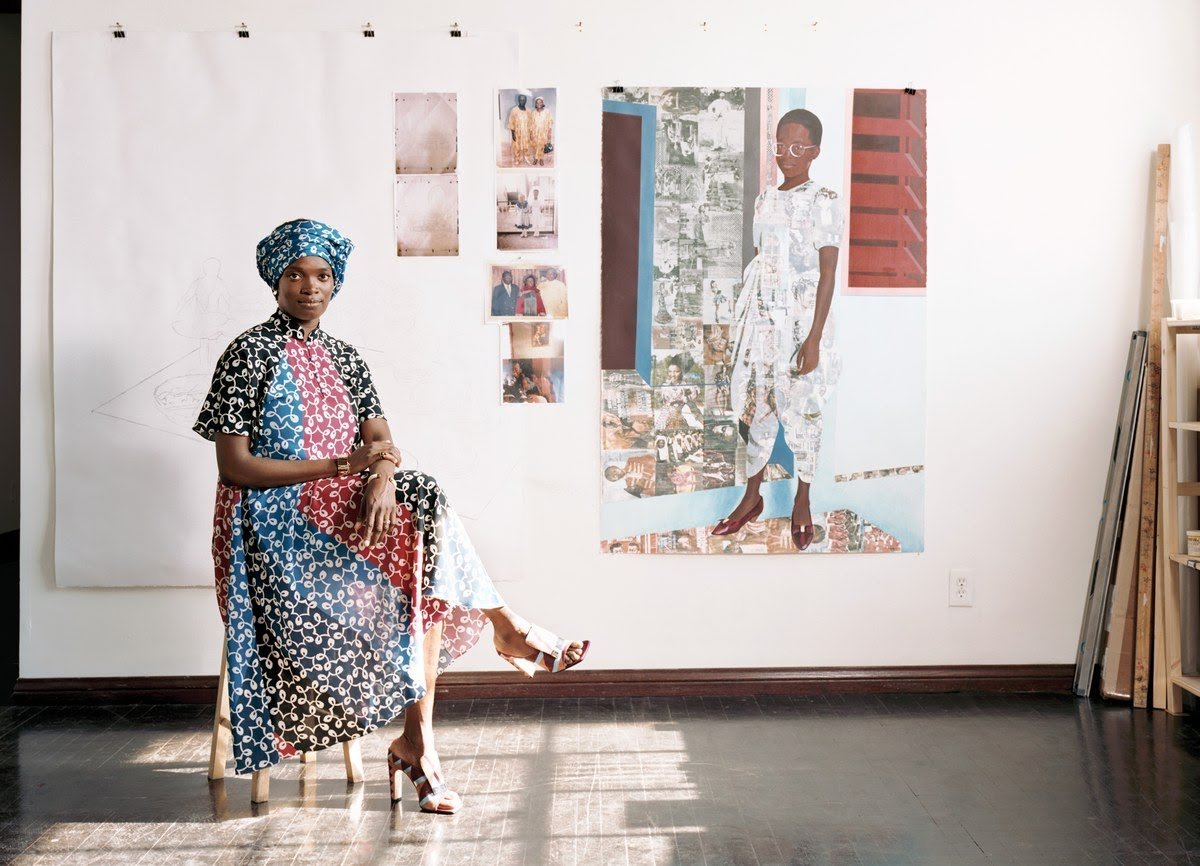 A lot of her painting features her husband Crosby 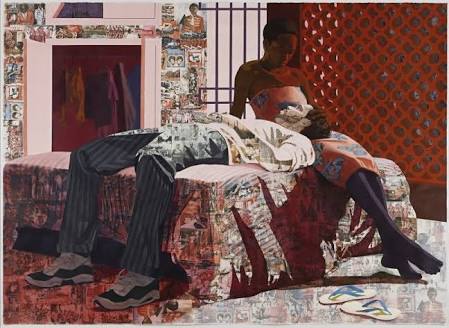 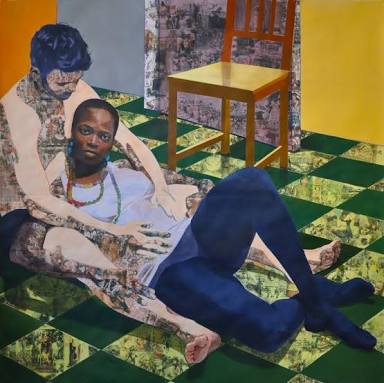 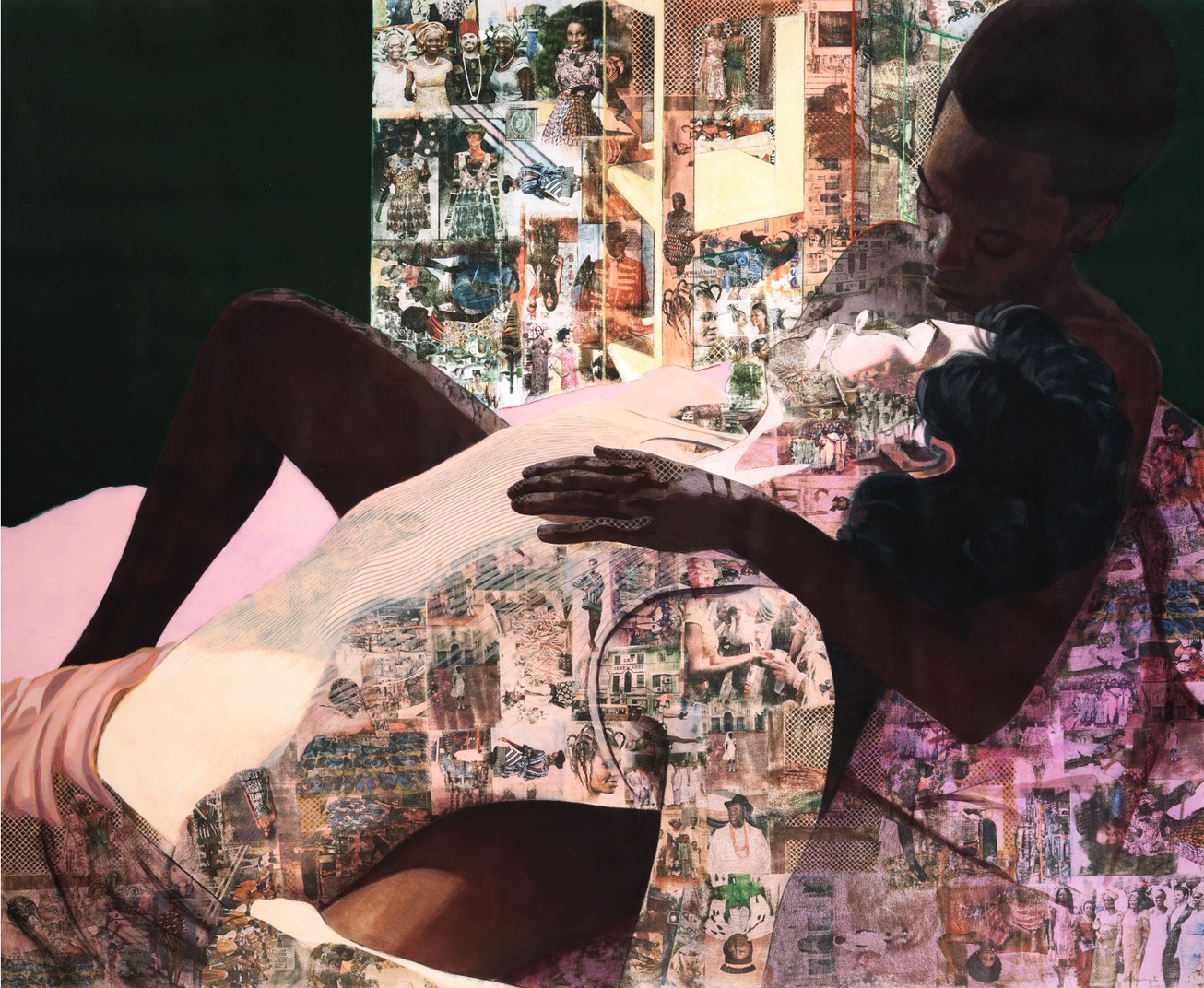 Six bidders vied for “Drown,” according to the New York Times. The painting presents a bold image, both visually and in terms of narrative. In a tender moment, Akunyili Crosby’s black body finds comfort with her husband’s white body. The intimate composition pairs dark and light color fields in the couple’s skin tones and the background with a voyeuristic presence of historic, community and familial figures.

“I think of myself as a woman, an Ibo woman, a Nigerian, an African, a person of color, an artist, and the fascinating thing is that the layers I add to how I identify myself changes over time,” the artist says in a Tate museum video. “It just keeps broadening as I move farther out into the world.” 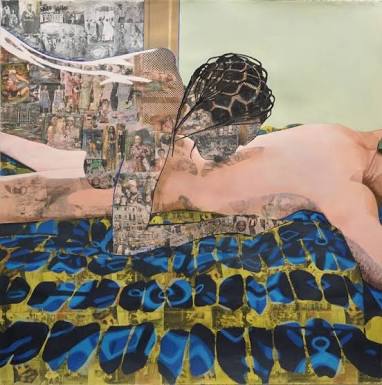 MANY ARTISTS GO OUT OF THEIR WAY to make clear that the issues raised in their work serve to start a conversation rather than reflect their own opinion and the figures they depict are not real people, but rather are anonymous or composites 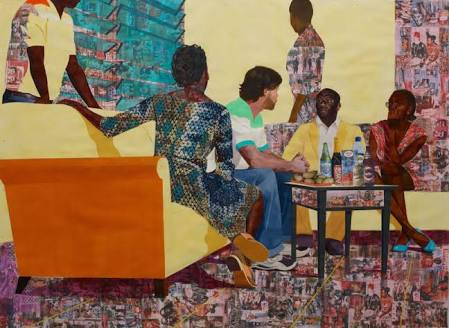 The approach of Njideka Akunyili Crosby is quite the opposite. Her collage paintings of domestic life—gatherings of family and friends—reflect her own story, her Nigerian heritage and evolving cultural experiences as a Los Angeles-based artist. 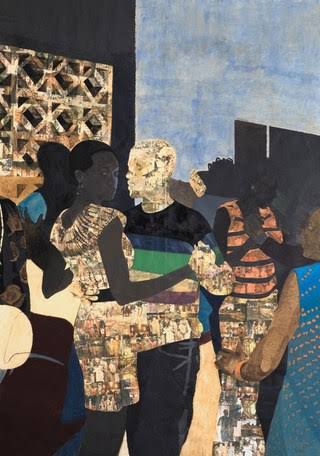 Her more intimate scenes are self portraits depicting moments with her Texas-born husband, Justin Crosby, who is white. 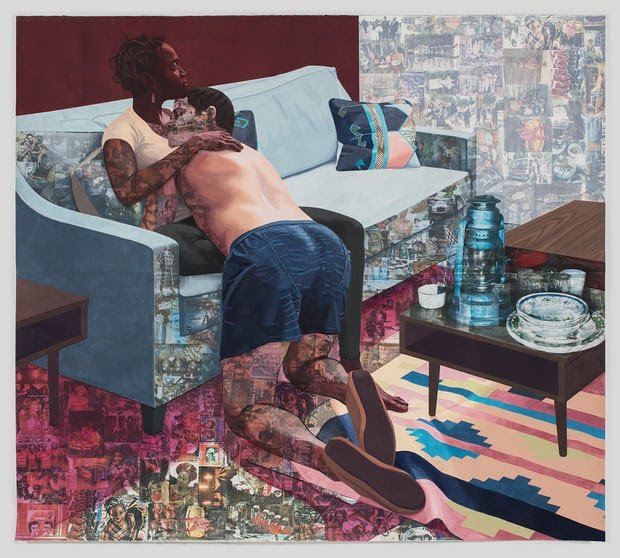 I ask her what Yale was like, but she isn’t too keen to talk about it. “Have you seen Mean Girls?” she asks, comically, “or the season of Project Runway where everyone gangs up on Michael Costello?” Arriving at the Studio Museum in Harlem, a space for black artists, was her salvation after that. “Yale was not a community. But I think of the Studio Museum as a family.” She says that almost every successful black artist in the US was nurtured there. In fact, she feels the debt so strongly that she recently gave them “a substantial amount of money. I told my husband that in Nigeria there are two kinds of giving, and one of them hurts. I want to feel like I lost something. That’s how much they mean to me.”

Source: By the Guardian

Why she decided to pursue art as a career 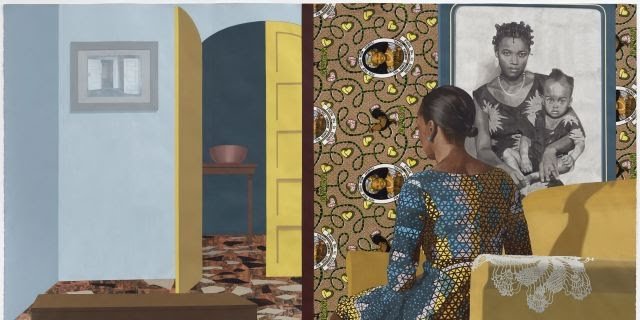 In college I was going to be pre-med, so I was taking a lot of calculus and science classes. I wanted [to add] something light [to my classes], and that's how I took my first painting class. I ended up doing a double concentration in studio art and biology. By the end of my time at [college] I was on the fence about which way to go, and I took a year off, went back to Nigeria, worked for a year, and then decided I wanted to be an artist. I think what it came down to for me was a sense of urgency. This was in 2004 or 2005, and it was a very exciting time in Nigeria. There were just incredible explosions of culture with literature, with music, with Nollywood [the Nigerian film industry], with fashion. Different industries were booming and blooming, and people were doing incredible things. There was just this collective sense of feeling like our stories are valid and we're going to [tell them] and not make other people do it for us. I was so thrilled by it that I wanted to contribute anywhere I could, and art felt like a way to do that.