How to develop obnoxiously thick skin 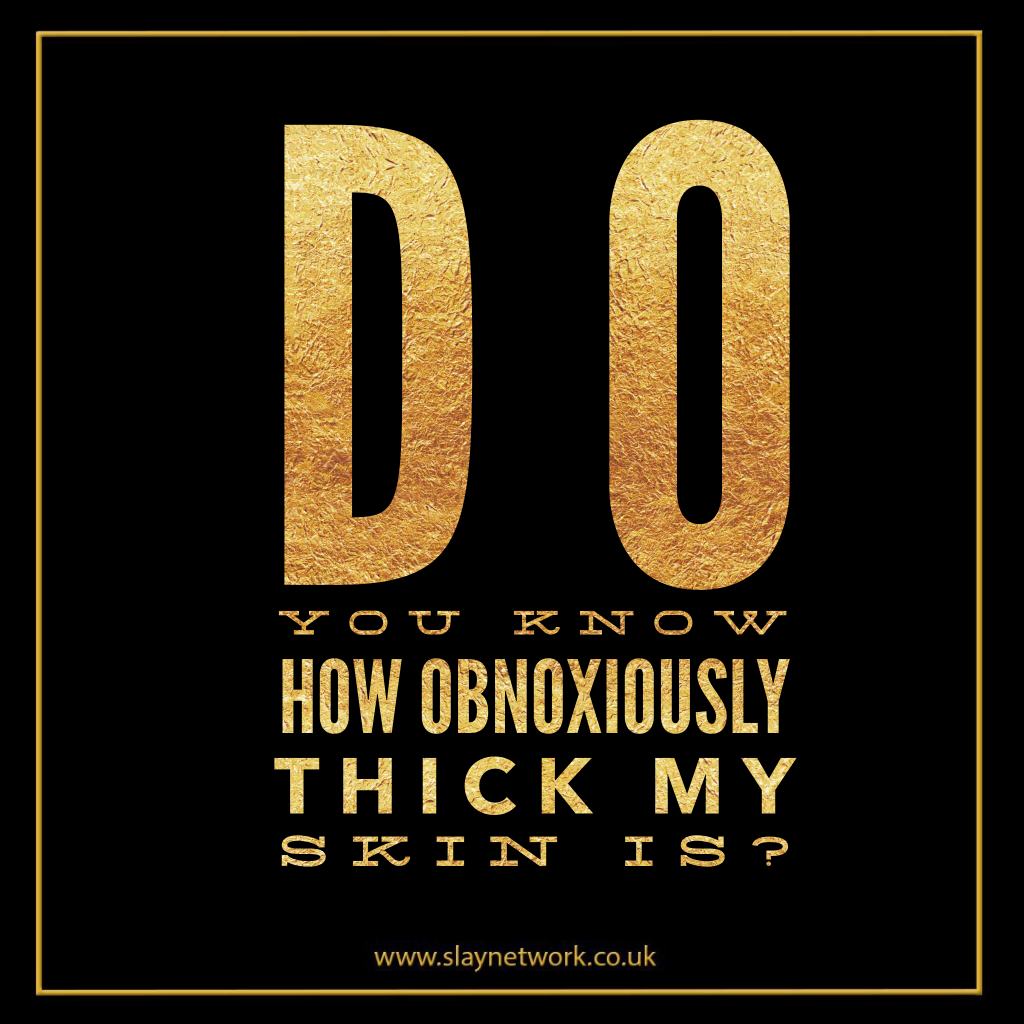 I don’t give a fuck what anybody thinks or says about me or thinks of me when it comes to business, you know why?

Because I trust my intuition 1 trillion percent.

I won’t lie. I want everyone to love my work and praise me for my writing.
But it’s impossible to avoid criticism.
This fact keeps many people from pursuing their dreams. Nobody wants to face criticism or deal with social rejection.
This post was inspired from hearing Gary Vaynerchuk say that you need to develop “obnoxiously thick skin,” to be successful.
We’re talking armadillo hide, armored car metal, Fort-Knox-like, impenetrable skin.

You’re going to need thick skin because when you’re on the rise, people are going to try to pull you back down to earth.
World-famous author, Elizabeth Gilbert, described the comments her friends and family had about her initial decision to pursue a career in writing:
“Aren’t you afraid you’re never going to have any success? Aren’t you afraid the humiliation of rejection will kill you? Aren’t you afraid that you’re going to work your whole life on this craft and nothing’s ever going to come of it and you’re going to die on a scrap heap of broken dreams and your mouth filled with bitter ash of failure?”
And of course her response to that was yes.
It’s the fear all of us share.
You were born pure and free of fear, but you’re taught to fear certain things as you grow older.
You learn to fear failure, criticism, and being different.
The only difference between those who live extraordinary lives and those who don’t is facing this fear and acting in spite of it.

Today I’m going to share some ways to face your fear of criticism, and develop the thick skin you need to become successful.

Two Types Of Criticism
There are two different types of criticism — thoughtful critiques and trolling.
A thoughtful critique happens when someone views your work and takes the time to point out specific areas they feel you can improve on.
Insecure people take any type of critique as an attack, but smart people use the critiques of others to improve their work.
If someone genuinely thinks you can do better in a certain area, perhaps you should listen to them. Feedback from people who view your work can be useful. Use the feedback you receive from other people to iterate and create better versions of your work in the future.
The next type of critic is a troll.
A troll is someone who is just trying to get under your skin. They’ve never accomplished anything in their life, else wouldn’t waste time trashing your work.

Attributes of a troll include:

It helps to visualize these people as actual trolls. Slimy, pimply faced ogres crouched over their laptops under a drawbridge. This depiction sums up the worth of their opinions.
They’re only significant if you allow them to be.

10 Tips For Facing Your Fear Of Criticism

* Understand the limited mindset of others — People who are afraid to move outside of their comfort zone will try to project their limitations onto you. Unfortunately, many of us have been raised to view life with a limited mindset. Understand how they see the world and you won’t take offense to their comments.
* Understand who you seek approval from — “You want praise from people who kick themselves every 15 minutes, the approval of people who despise themselves?” — Marcus Aurelius. Take the time to consider the mindset of the people you seek approval from.
* Understand haters come with the territory — If you don’t have any haters, you’re a nobody. It’s impossible to be well known or recognized without having critics. In fact, large amounts of criticism may draw more attention to your work. People love a controversy.
* Don’t take things personally — If you take something personally it’s because you agree with it. It takes time to develop thick skin. Part of that development is understanding that being upset is a choice.
* Don’t be ambitious, be sane — Aurelius also said, “ambition means tying your well-being to the opinions of others. Sanity means tying it to your actions.” If you want to be sane you need to find happiness and meaning in the effort you’re putting forth, regardless of the results. Your work will remain restricted if it’s tied to the opinions of other people.
* Don’t respond to trolls — Ever. Don’t reply to negative comments on your blog posts. Don’t feel the need to defend yourself when you’re being attacked. It’s a waste of your time and energy. Put that energy in to continuing to create.
* Google “Negative comments about Mother Theresa” — There are 494,000 results of people bashing Mother Theresa. Even the most pious individuals aren’t immune to criticism. Understand this fact and embrace it.
* Consider the life of a critic — Nobody ever built a statue to a critic. A critic takes a small amount of time to judge work you may have spent several hours, days, months, years, or your entire life creating. It’s much easier to critique other people’s work than to do work of your own.
* Understand someone looks up to you — If you’re pursuing something great, you have people who look up to you. There are people who respect you for putting yourself out there. There are people who appreciate your work. Keep in mind that you’re touching other people’s lives with the work you do. It would be selfish to hide your gifts from a world that needs it because you’re scared of a little criticism.
* Do great work — When you’re creating something you should be your toughest critic. Not to get down on yourself, but to make sure the work you’re putting out is great. When you take the time to do great work you can negate potential criticism. You can also feel positive about the work you do even when it’s criticized.

If you Are ready to develop obnoxiously thick skin? Click here

Because I trust my intuition 1 trillion percent. 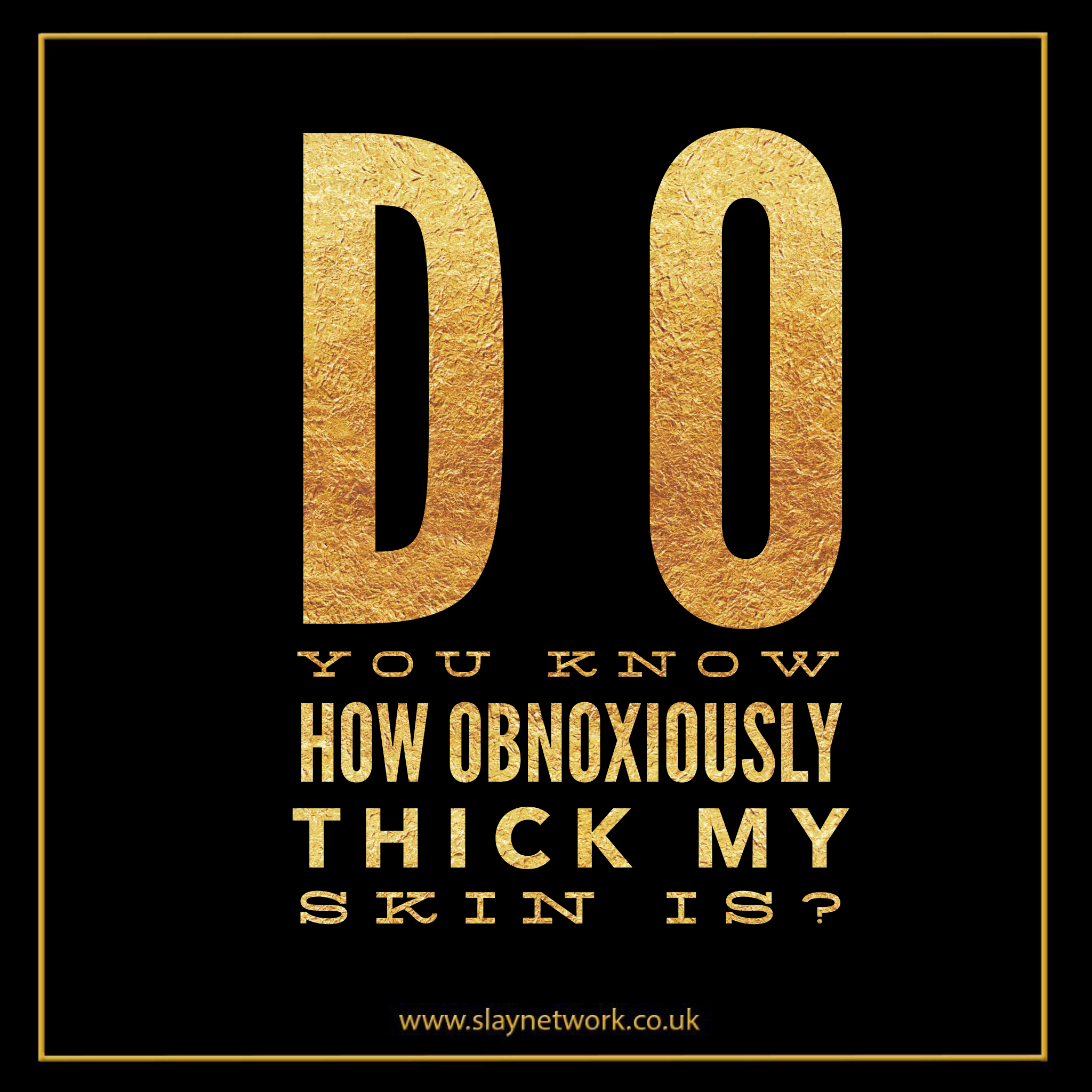