Piers Morgan and Amber Rose are going at it on Twitter and it’s not even a fair fight, because Piers is a dummy with bad ideas and Amber is smart and great. Nevertheless, let’s dive in.
On Saturday, Amber Rose shared a pants-off, dance-off photo of her full bush on Instagram to promote her SlutWalk and to #bringbackthebush. Unfortunately, the prudes on Instagram took the photo down, and now the tech behemoth has back-up from the #1 whiny wang on the internet: Piers Morgan. You would think that after JK Rowling dealt him the smack down to end all smack downs, he would slither back into the primordial ooze he calls a human skin suit and retreat forever, but alas. We live on this cursed planet, and good things can’t always happen.

Anyway, now it’s Queen Amber Rose’s turn to decimate the sexist slug, and it’s his own damn fault for summoning her in the first place.
In response to Amber’s full bush Instagram, Morgan tweeted, “Put it away, luv. Thanks”
Of course, that’s when she had to come correct the situation.
“I’ll take Things Misogynistic Assholes Say for 500, Alex,” she tweeted back, and I died laughing, and then was reborn, anew, ready to live another day.

Because Piers doesn’t know when to stop, he came back for more punishment.
“It’s not ‘misogyny’ to think that posting nude photos in the supposed name of feminist empowerment is pathetic attention-seeking bulls**t,” he tweeted.
“Nude? Where?,” Amber tweeted. “My breast nor my vagina was showing and my legs were closed. I am assuming you are referring to the pubic hair that was shown in the picture. Uncomfortable? Get over it.”

“I can handle your naked body, Amber – relax. I just can’t handle your ridiculous claim to be stripping off in the name of feminism,” Piers tweeted, like a misogynist Goliath, condescending to a David who will soon own his antiquated ass.

That’s when Amber truly brought it:

Then, to add insult to injury, Amber shared a nude pic of Adam Levine, asking Piers if he thought it was “attention-seeking.”

Piers said no because Adam was raising awareness for prostate and testicular cancer charity. Again, Amber crushed him with logic.

“I raise awareness for my foundation as well Piers,” she responded. “That’s like saying breast cancer awareness is cool but what about HIV and AIDS…my ‘naked’ body offended you for my nonprofit SlutWalk but a woman grabbing Adam Levine’s dick and balls was cool?”

BUT STILL, HE WOULD NOT QUIT. (Is that the opposite of, “Nevertheless, she persisted.”? Am I in hell?) Lordy, the stamina on this hypocritical geezer.
“This is what Emmeline Pankhurst fought so hard for? Jeez,” he tweeted, referencing the British suffragette movement. (And actually, yeah, equality is exactly what she fought for.)

“I’m sorry I forgot only men can be sexually confident,” Amber expertly deflected.

“If famous men started posting naked photos to social media claiming it was to ‘promote male empowerment’, they’d be jailed.”

And also a picture of himself naked and shilling Burger King for money. (Completely related: I’m never eating again.)

And that is when Amber went Boss-level and totally destroyed him.

“So you got naked for a Burger King check and ur giving me a hard time?” Rose responded.

Whose the boss now!?

The beginning of it all 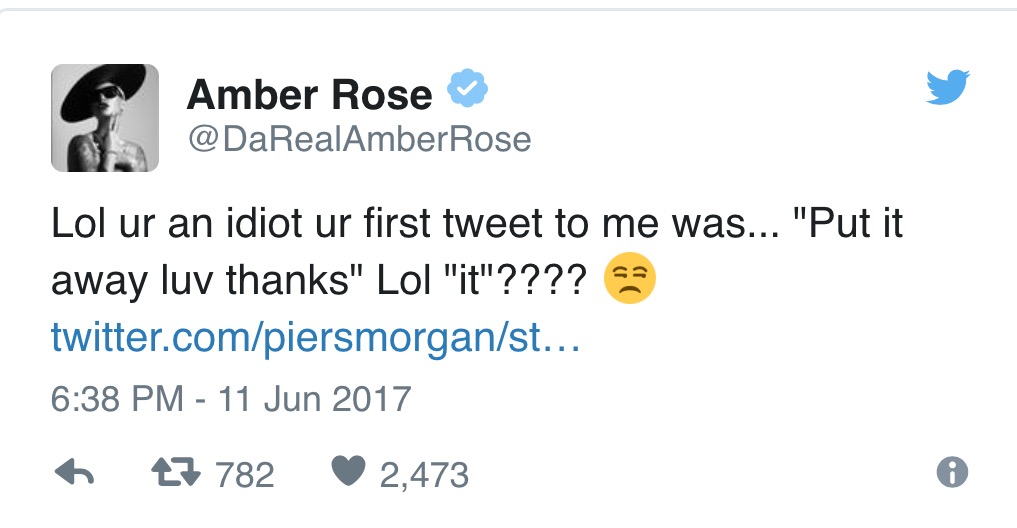 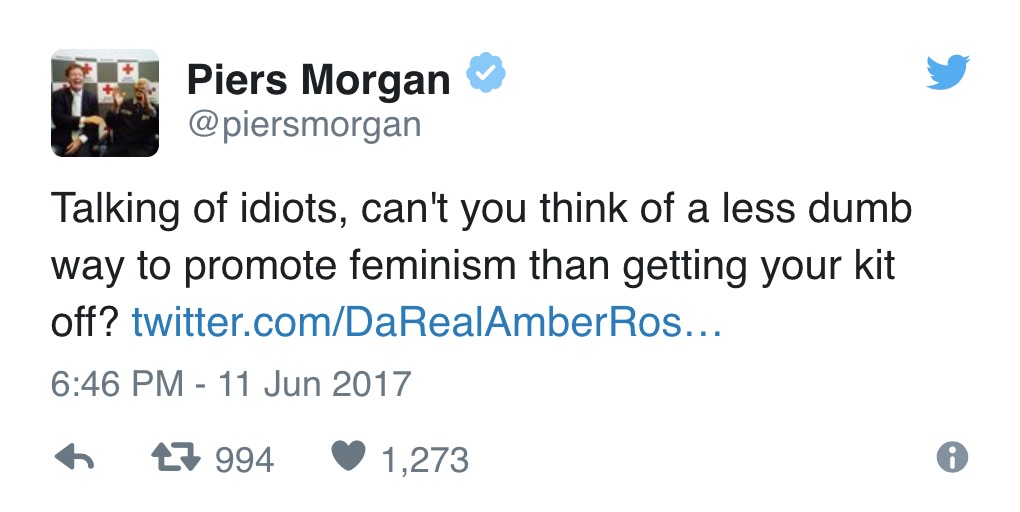 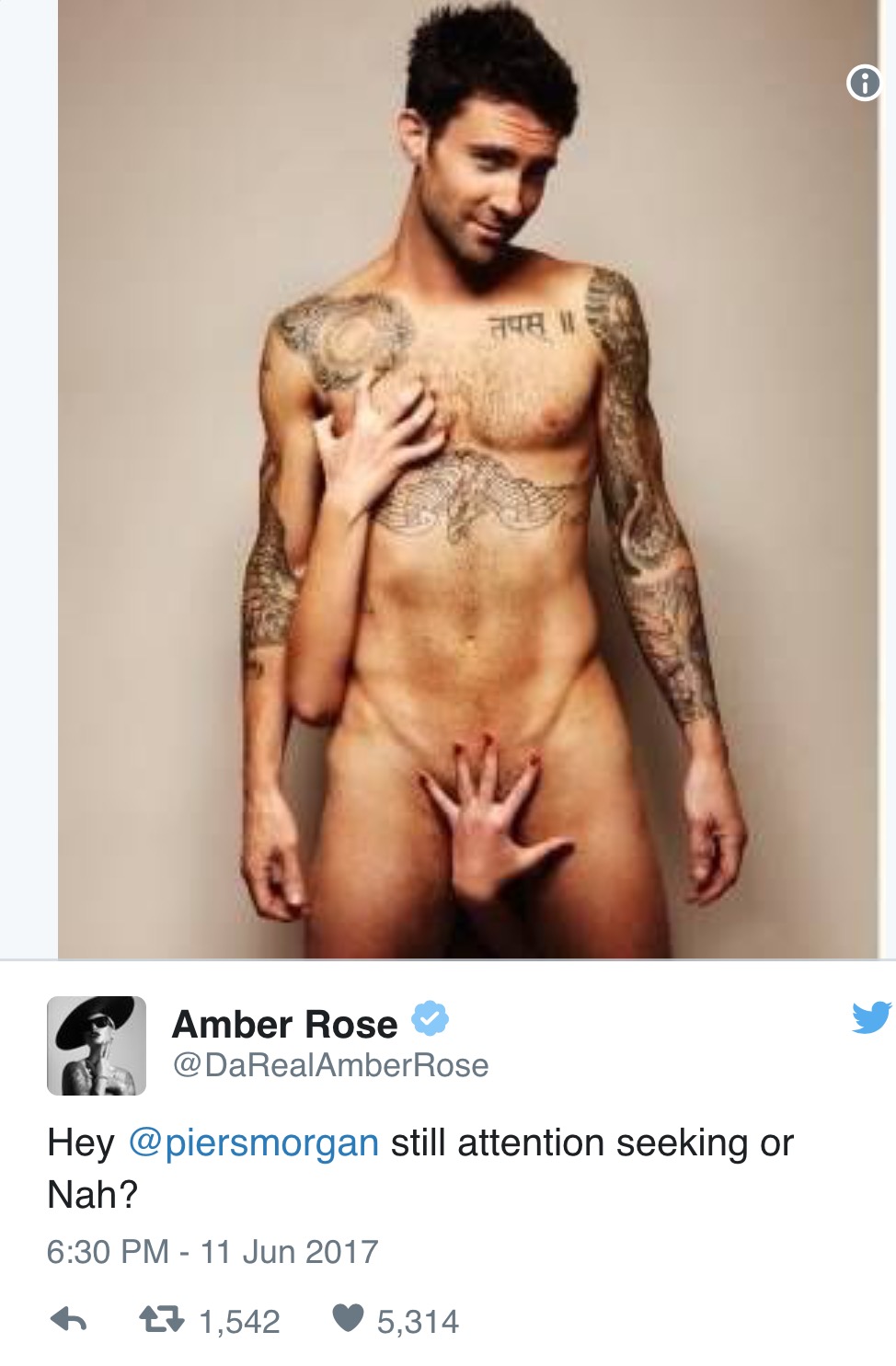 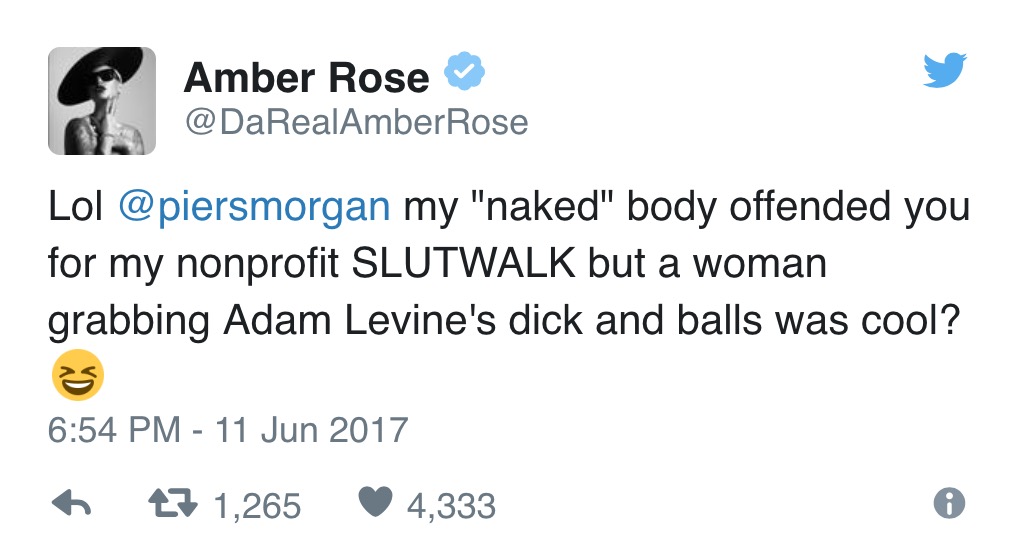 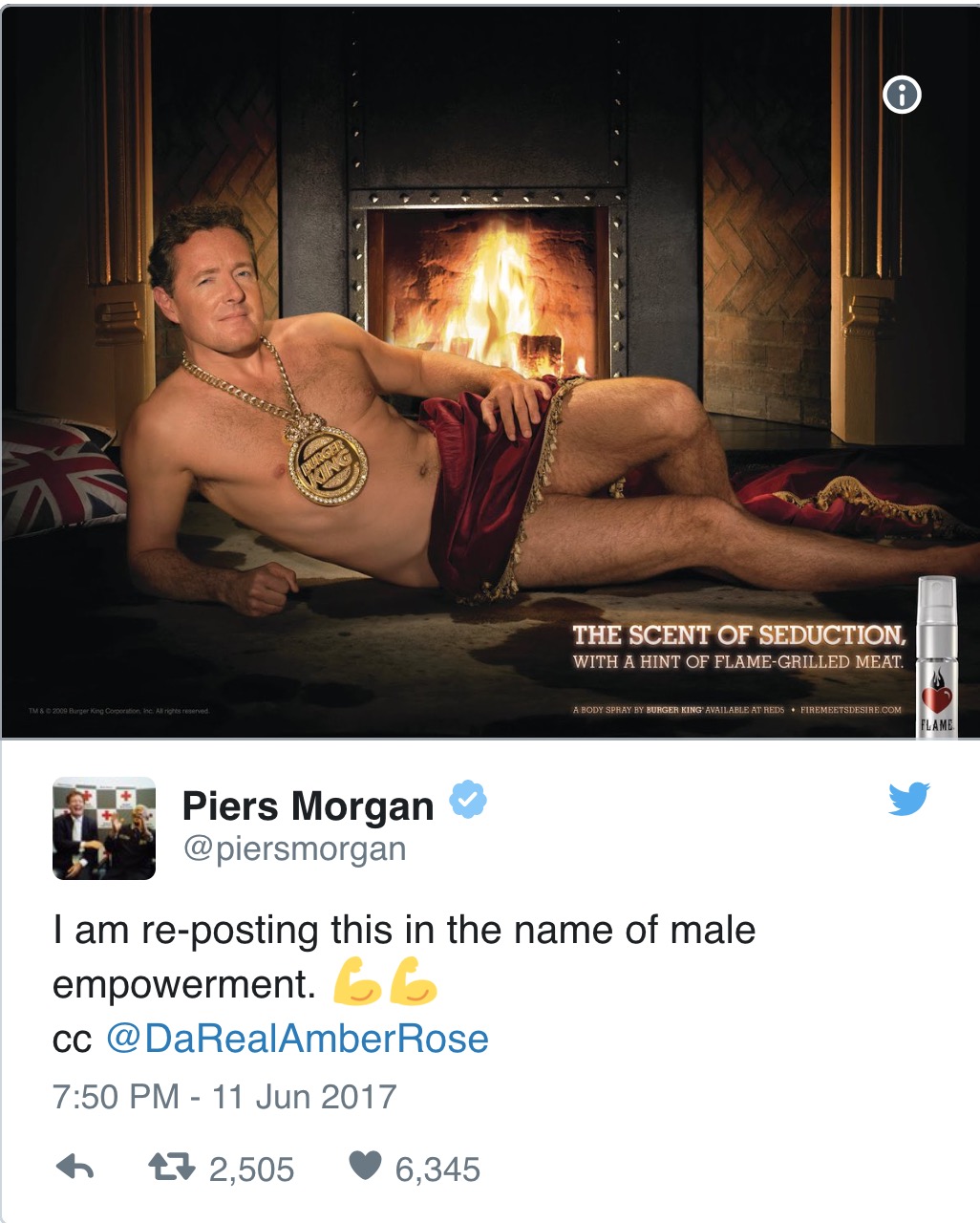 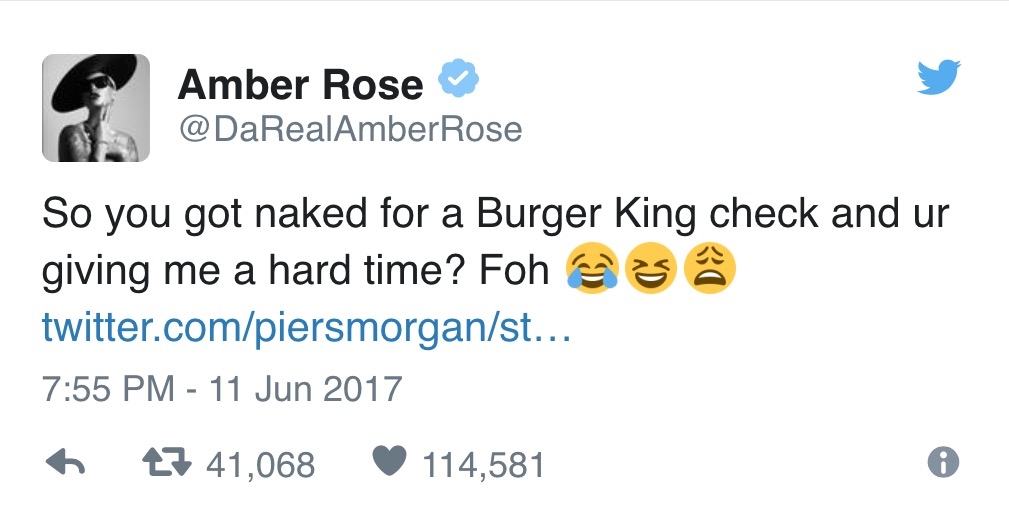 A Slut, a Faggot, a Queer, a Fat Bitch and a MAN, We embrace all of the derogatory labels that are thrown at us. We've been sexually abused/assaulted, verbally abused, victim blamed, slut shamed and dealt with A lot of double standards on my team so if you're anything like us or want to take a stand with us go to AmberRoseSlutWalk.com to sign up, volunteer and/or donate! #amberroseslutwalk October 1st 2017

The photo that offended many especially Piers! 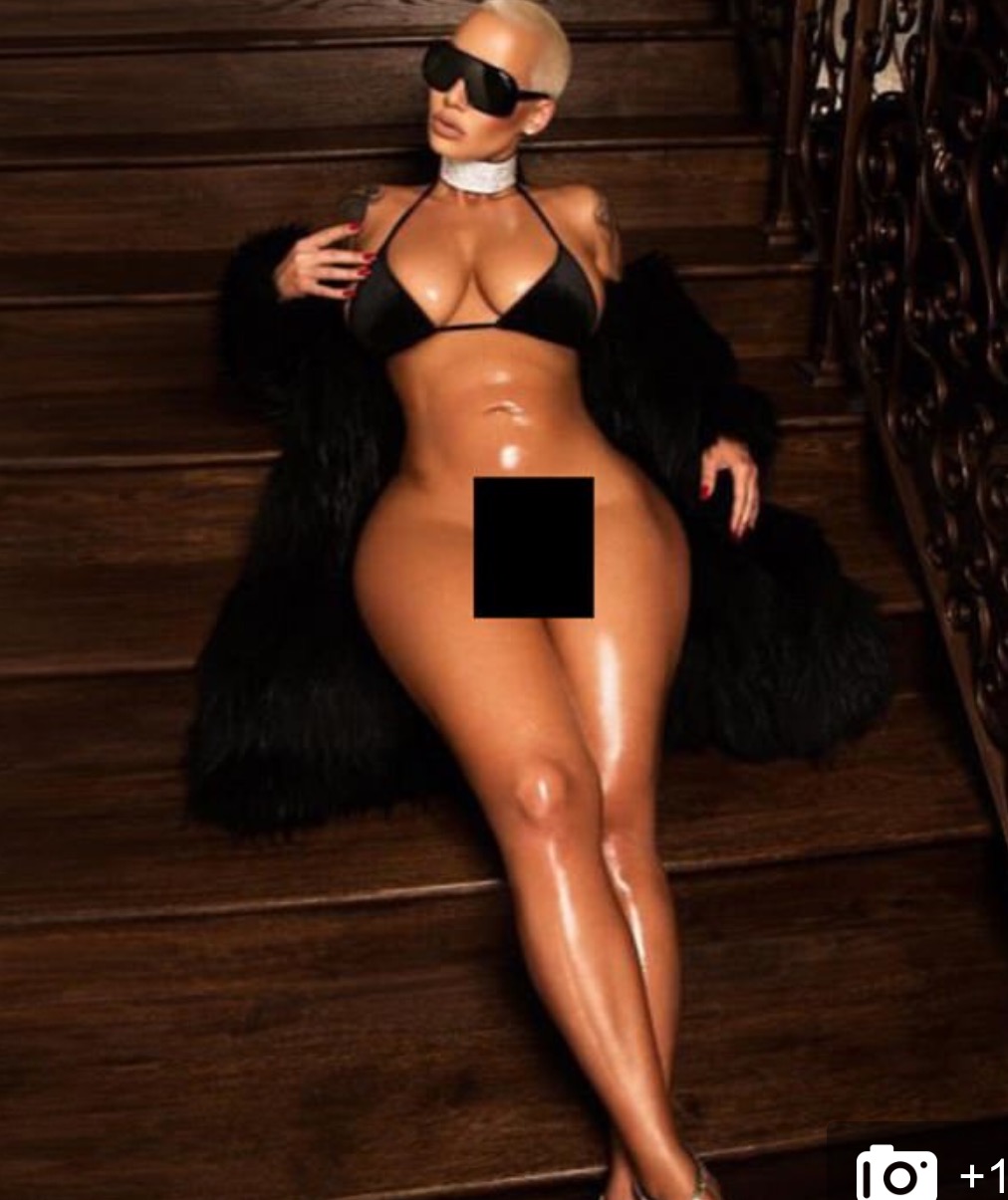 She did remember to put on her Sunnies, shoes, and jewellery! 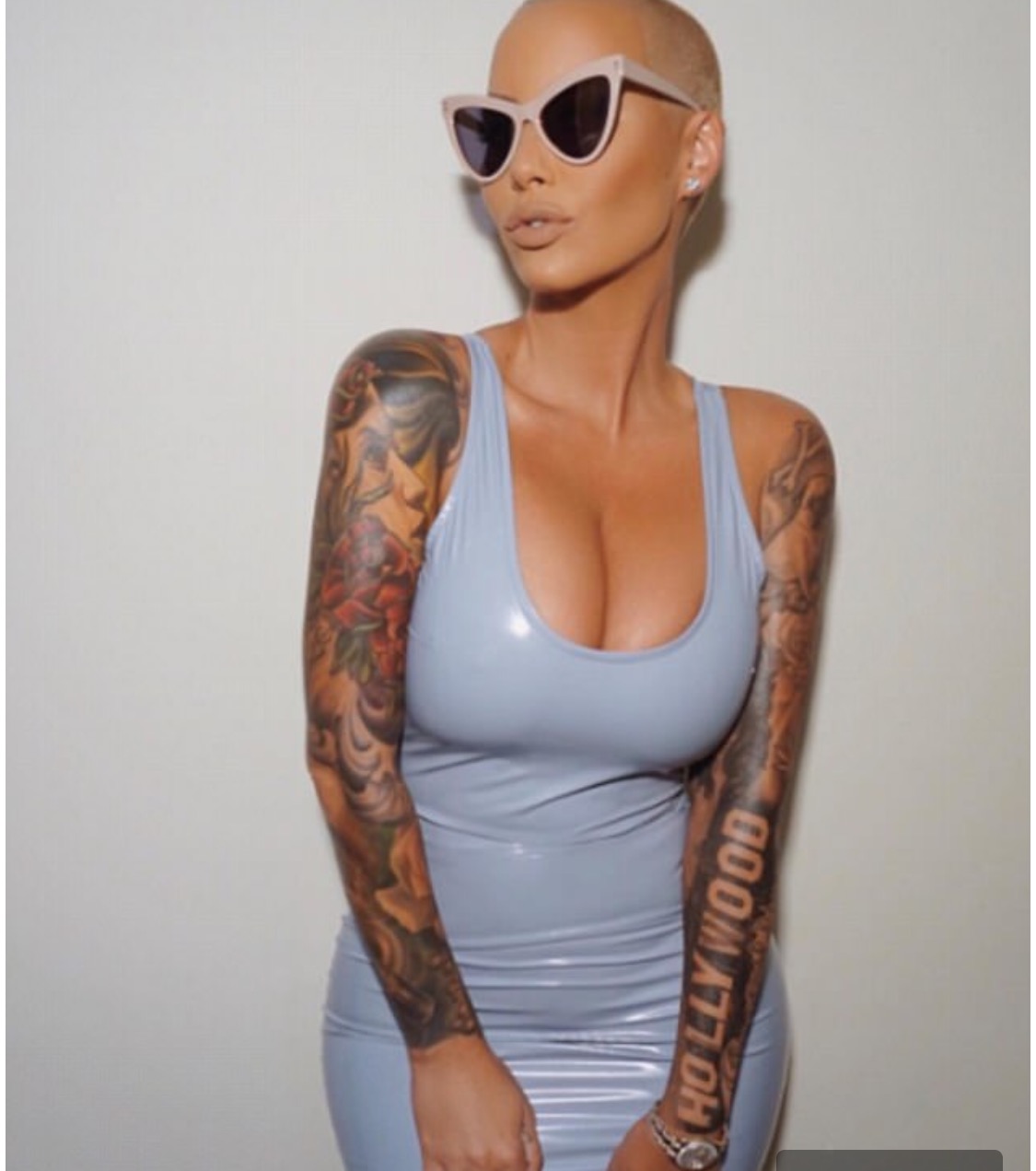