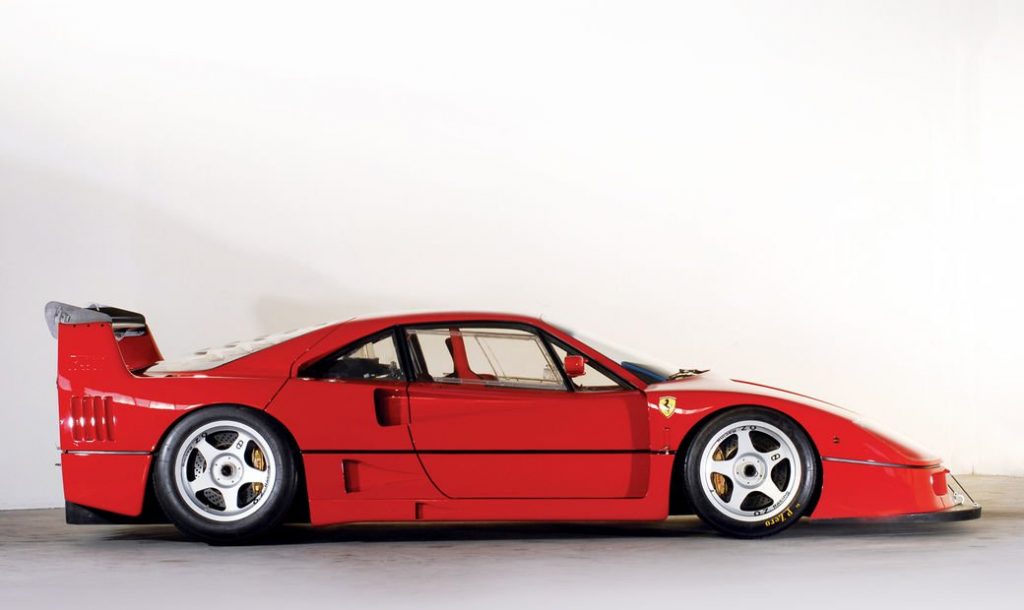 One of the best F40LM examples on the market today. This particular model is configured to GTC spec, just four GTC them were ever built.

A RACE CAR FOR THE STREET GOES RACING

Two hundred miles per hour was a mythical speed in the 1980s.

Akin to the race to break the sound barrier 40 years earlier, and as hard as everyone tried, the 200-mph mark remained elusive. For the last 20 years, manufacturers have been inching closer and closer to cracking 200 mph, but with every step forward, the next step would prove exponentially more difficult. Many thought Porsche would be the first to crack the mark with their ground-breaking 959, but even they turned up three miles per hour short.

Ferrari decided to make their own run at 200 mph. For their 40th anniversary, the factory went in the opposite direction of Stuttgart and built an incredibly lightweight and aerodynamic supercar that was fitted with an extremely powerful twin-turbocharged V-8. Sure enough, the plan worked, and the F40 was the first production car to break 200 mph, registering a top speed of 201.4 mph. The F40 proved that sometimes less is indeed more.

While Ferrari never originally intended for the 1993 Ferrari F40LM to go racing, a number of individuals with the wherewithal to put the car on the track quickly realized the 1993 Ferrari F40LM’s racing potential. Daniel Marin, of Charles Pozzi SA, successfully lobbied Ferrari to authorize Michelotto to produce a series of racing examples that adhered to IMSA rules, giving the world’s fastest production car a chance to earn its keep on the race track.

This limited-production Ferrari dubbed the 1993 Ferrari F40LM, for Le Mans, would be much more radical, exclusive, and exciting than the already intense F40 in every way. Michelotto took the opportunity to completely revamp the car by reinforcing the chassis and fitting more aggressive bodywork with more extreme front and rear wings, as well as uprated brakes and suspension, a competition-spec gearbox, wider wheels and tires, and an even more stripped-out interior, which featured a futuristic digital dashboard. In a further effort to save weight, the F40’s distinctive flip-up headlights were replaced with fixed lamps behind Lexan covers. In the end, the 1993 Ferrari F40LM weighed in at just 2,314 pounds.

The engine, now designated F120 B, retained the same displacement as the road going car, but the output of the IHI turbochargers was upped to 2.6 bar and the compression ratio was increased to 8.0:1. Michelotto also fitted bigger Behr intercoolers, new camshafts, and a new Weber Marelli electronic fuel-injection system. Power was quoted as 720 horsepower at 7,500 rpm, but without the air restrictors required for competition, the engine could produce upwards of 760 brake horsepower!

Instructions to purchase: click the Buy Now link above, enter the title of this post in the inquiry field, fill in the necessary details and click send. Slay Concierge will contact you to confirm details 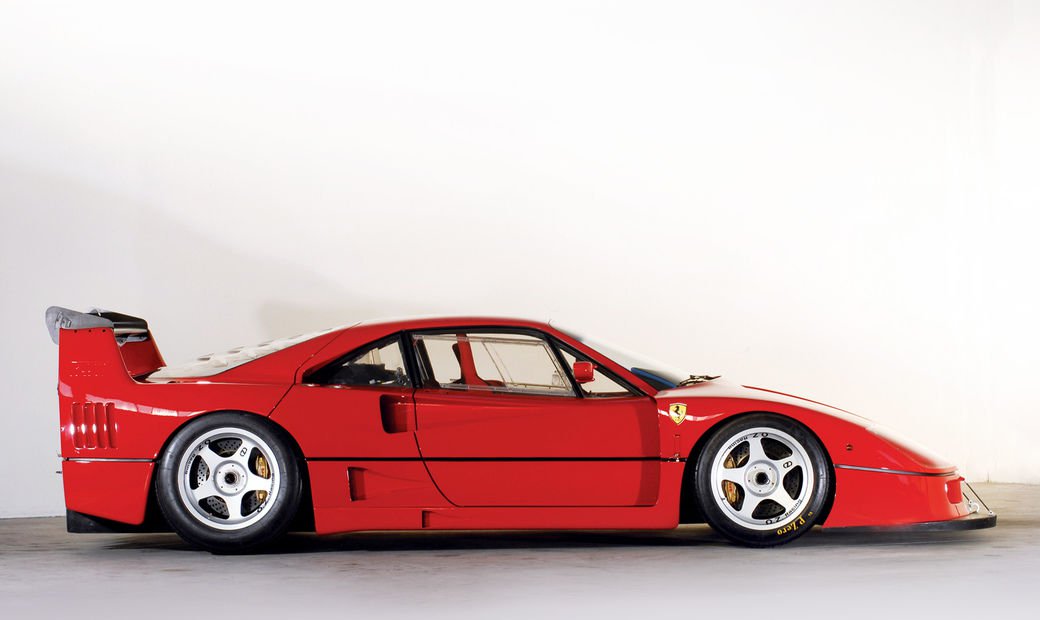 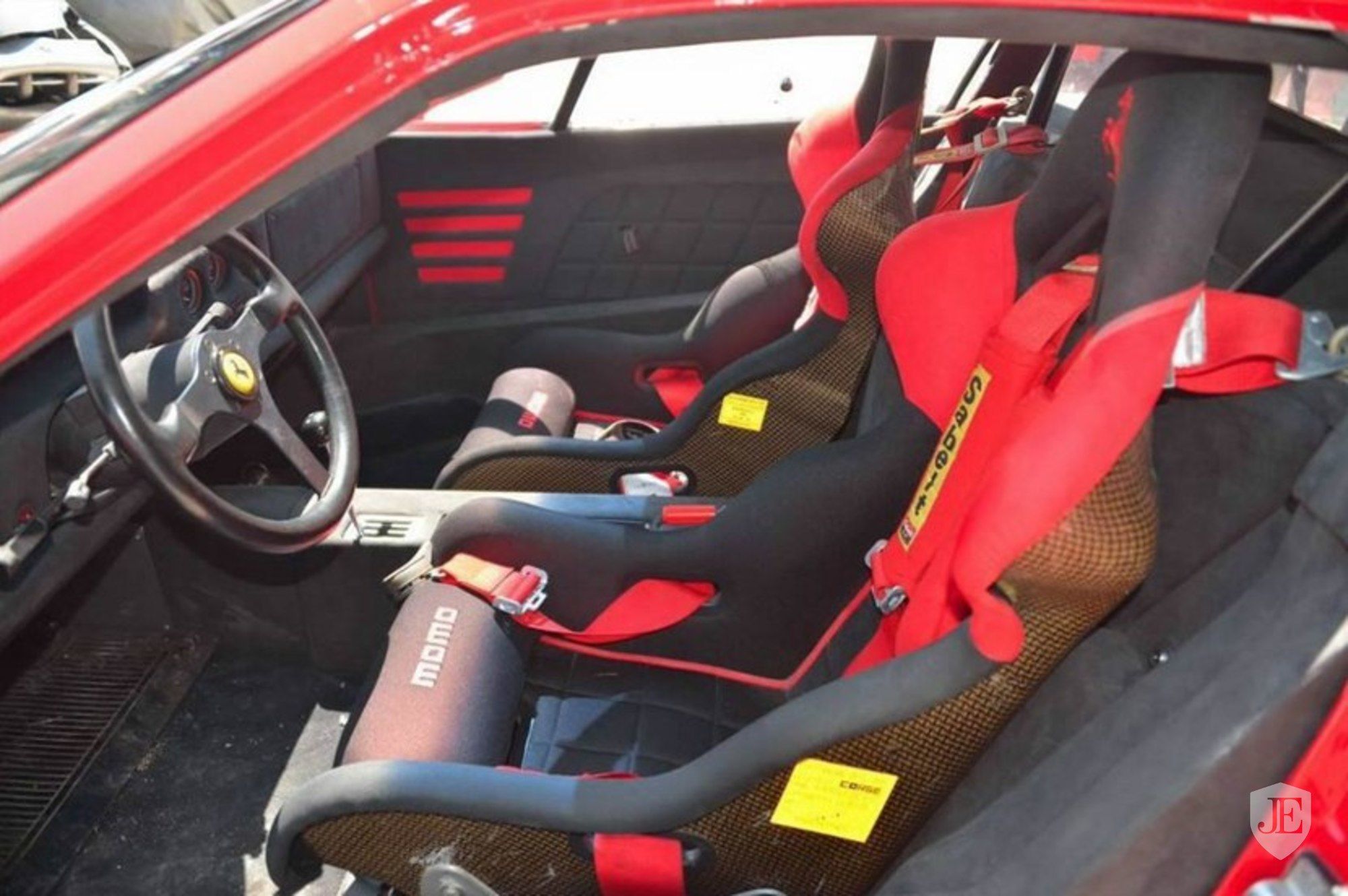